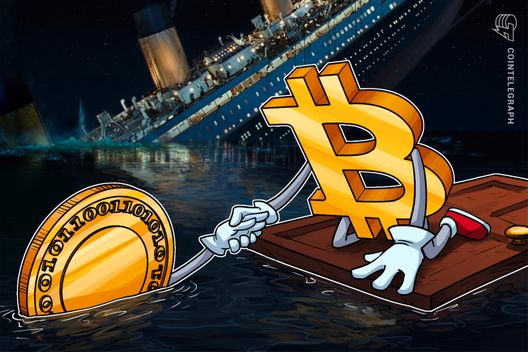 Crypto assets have seen a second day of losses, with Bitcoin now well below the $8,000 price point to hover around $7,550, and most major cryptos in the red.

August 1: Crypto assets have seen a second day of losses, with Bitcoin (BTC) now well below the $8,000 psychological price point and most of the major crypto assets in the red, according to data from Coin360.

Bitcoin (BTC) is trading around $7,490 to press time, having lost almost 3 percent on the day. Since the coin’s July 25 peak at $8,431, the leading cryptocurrency dipped down below $8,000 yesterday for the third time this week. The coin saw another sharp drop this morning, before trading sideways. 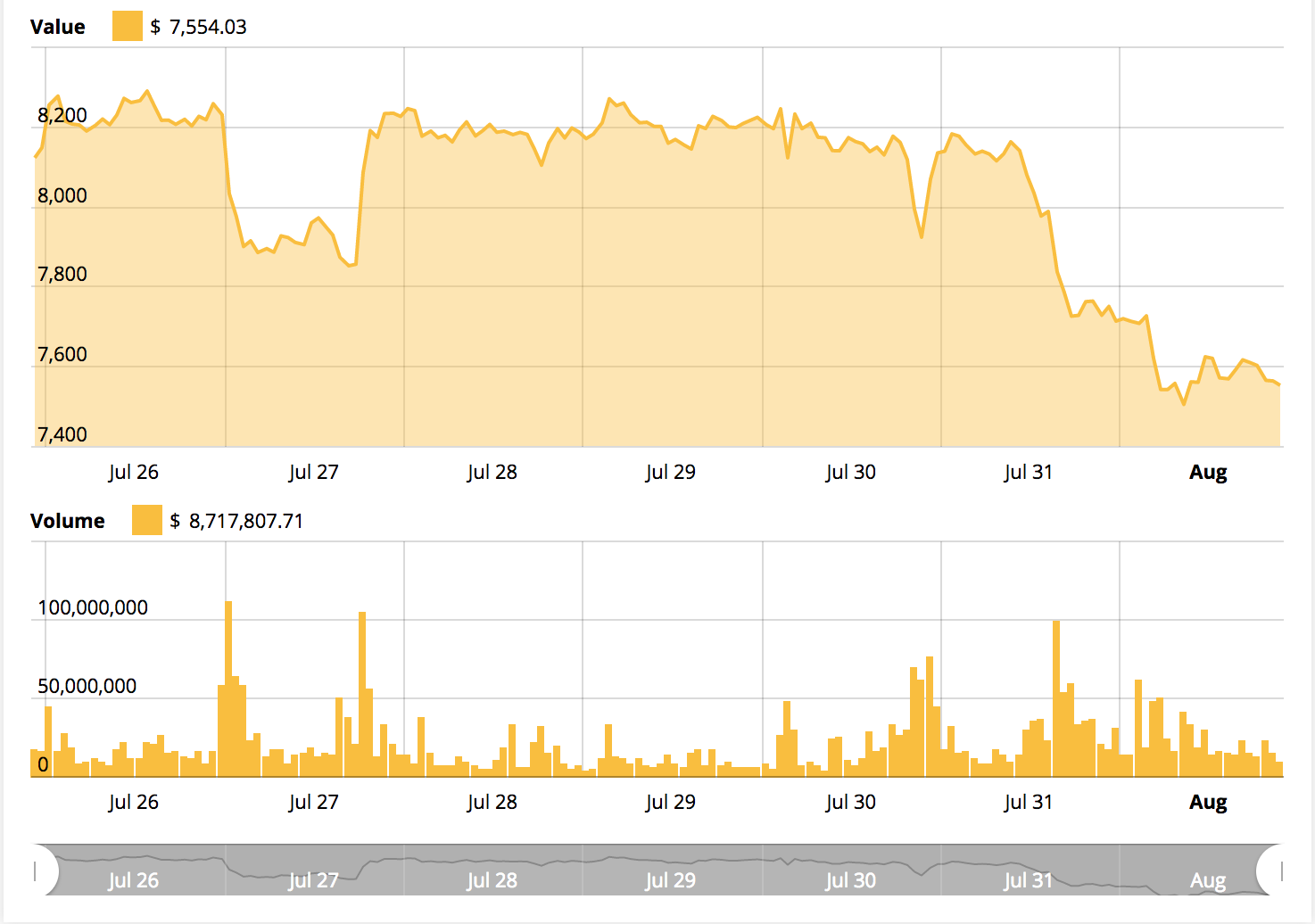 Bitcoin’s weekly price performance is now down by around 9.3 percent, but monthly growth remains a solid 17.74 percent.

Ethereum (ETH) has seen heftier losses on the day, down a solid 5 percent to trade around $411 at press time. The leading altcoin lost around $19 in value during early trading hours, traded sideways around $425, and then dropped to see an intra-day low of $410 an hour before press time. Ethereum’s weekly price performance is around 13.61 percent in the negative, having seen a more gradual but sustained downward trend than Bitcoin over the same time frame. Ethereum’s monthly losses are almost 11 percent. 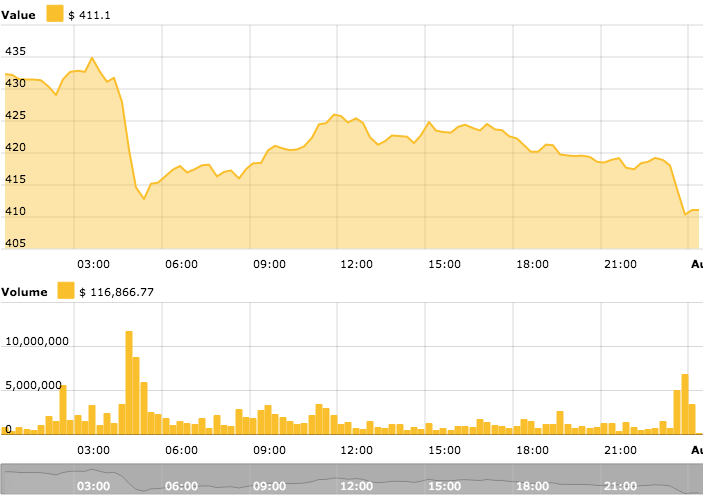 On CoinMarketCap’s listings, most of the top 10 coins by market cap are down between 1 and 5 percent on the day.

Ripple (XRP) is the only outlier, up 1.6 percent and seeing a spike in price earlier today, despite trading downwards most of the week. The coin is currently trading at $0.44 to press time. The asset’s relatively strong performance has perhaps been buoyed by yesterday’s news that the 42nd President of the United States Bill Clinton will be the keynote speaker to kick off Ripple’s global payments tech conference, Swell, this fall. 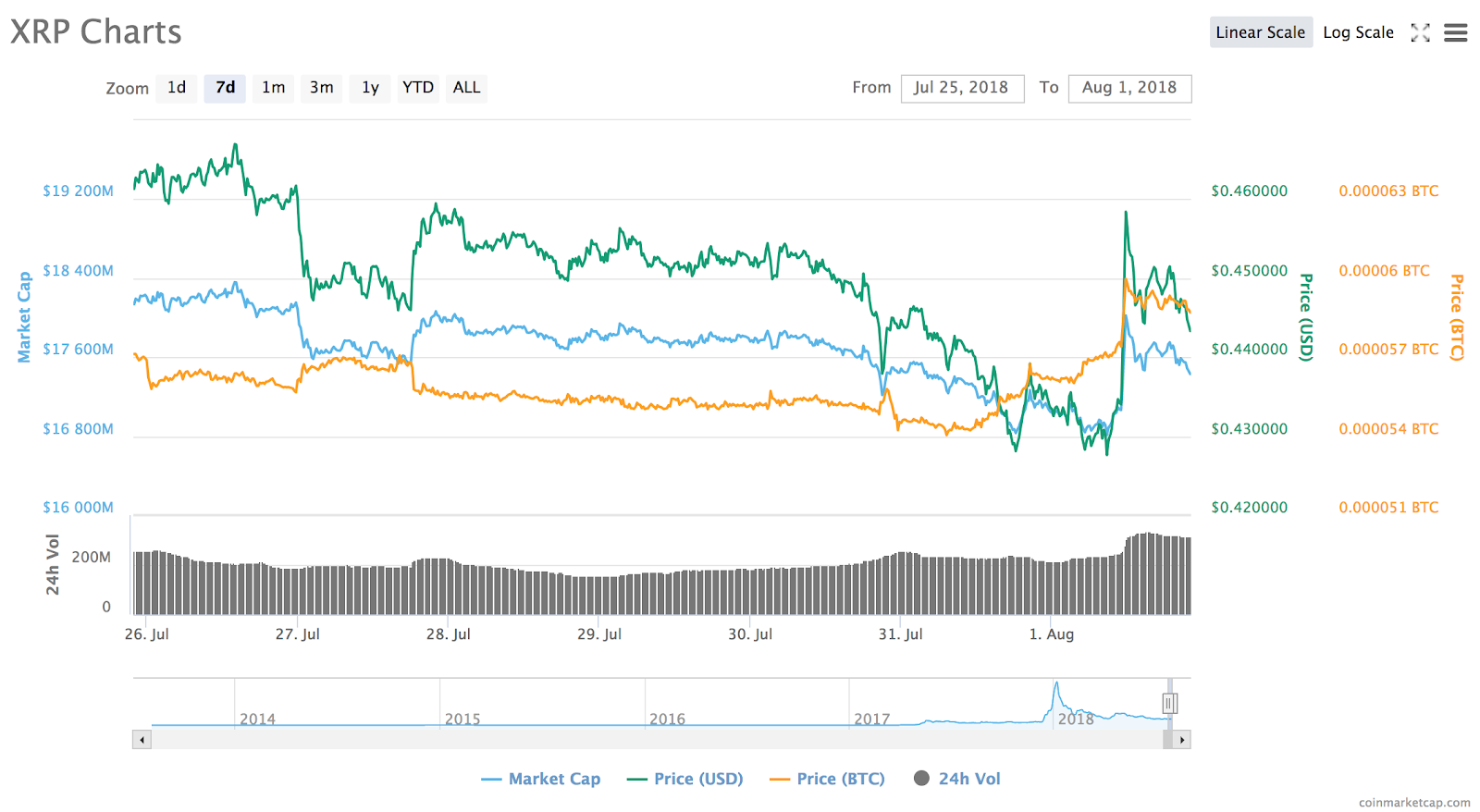 After Ethereum, Litecoin  (LTC) and EOS (EOS) have seen the most losses of the top ten coins, both down 3.45 percent on the day to press time.

Among the top twenty coins by market cap, Dash and Monero (XMR) are trading the most stably, both currently up less than 1 percent.

Total market capitalization of all cryptocurrencies has inched yet further downwards on the day, at $268.4 billion to press time –– $8 billion lost over the 24-hour period.

While the markets have seen their second, faltering day of continued losses, recent news indicates that the distance between the crypto industry and major institutional players continues to narrow.

Meanwhile, news of Morgan Stanley’s recruitment of a self-described crypto trading expert and 12-year veteran of Credit Suisse as its new head of digital asset markets suggests that the trend of figures leaving the traditional financial sector for crypto continues.

A major new report from the U.S. Treasury Department published yesterday revealed a strong concern that the U.S. keep pace with innovation and tailor its regulations to accommodate disruptive financial technologies, including cryptocurrencies and blockchain.