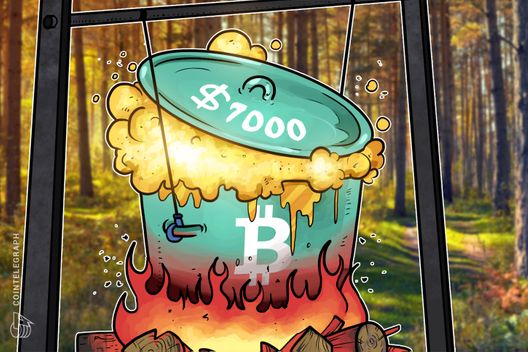 Bitcoin has fallen slightly below $7,000, and ETH remains close to $400, after a week of mixed news in the crypto ecosystem.

The crypto markets are holding their own this week, with Bitcoin (BTC) not venturing too far away from $7,000, even amid news that India’s central bank would stop dealing with crypto-related businesses.

The relatively steady prices could be attributed to a big adoption win in Asia yesterday, when Omise and OmiseGO signed a Memorandum of Understanding for fintech and Blockchain innovation with a South Korean banking affiliate.

BTC is currently trading for around $6,880, up a little more than 3 percent over a 24 hour period to press time.

Ethereum (ETH) is also nearing $400, currently trading at around $381 and up a little more than 3 percent over a 24 hour period to press time. Of the top ten coins listed on CoinMarketCap, only EOS is in the red, down less than 1 percent over a 24 hour period and trading for around $5.92 to press time.

Monero, which recently updated its protocol to protect the cryptocurrency against ASIC miners, specifically Bitmain’s recently announced Antimer X3, is up a little more than 1 percent over a 24 hour period, in 11th place on CoinMarketCap, trading around $170 by press time.

Total market cap is around $258 bln according to data from CoinMarketCap, up from April 1’s intraweek low of around $243 bln.