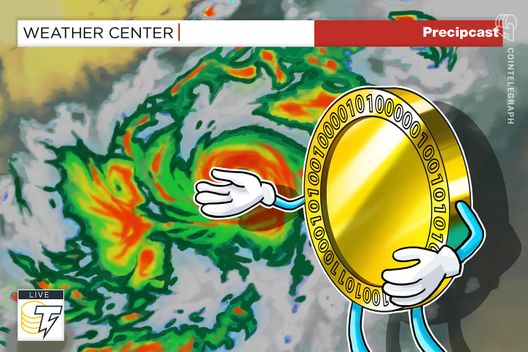 The CEO of American Express-backed startup Abra has predicted that big investors will make “all hell break loose” in a recent interview with Business Insider. He mentioned that there is currently little large-scale institutional money in cryptocurrencies and when this changes the impact on Bitcoin’s price will be very positive.

So, what is preventing this institutional money to flow into Bitcoin and cryptocurrency markets in general? The current technological limitations of Blockchain could be a key reason, especially those related to scaling. However, right now there are scientists and software developers building trailblazing innovations that could take Distributed Ledger Technology (DLT) to the next level, as pointed out by Don Tapscott, author of the book ‘Blockchain Revolution’.

Decentralization, scalability and security are the trilemma in DLT meaning that if you were to improve scalability then security would be compromised, and so on. However, this trilemma, which has been the limiting factor for the technology, is about to be overcome.

Ethereum and Zilliqa are working on a process called “sharding” which could greatly improve their throughput and their number of transactions per second – matching or surpassing those of Visa or Mastercard.

Other projects are creating the ‘Internet of Blockchains’ by allowing interoperability among  Blockchains, both public and private. They would also offer shared security and instant finality meaning that it will not be necessary to wait for several confirmations to validate a transaction.

Furthermore, hacking attacks such as the one that affected the DAO and triggered the Ethereum hard fork could become a thing of the past once formal verification of smart contracts, such as the ones Tezos or Zen Protocol projects are using, will ensure that there are absolutely no errors in the code and therefore no way to attack it. Formal verification is already used in airplanes, medical equipment and nuclear reactors, all places where there is little scope for errors.

Xinshu Dong, CEO of Zilliqa, among the first Blockchain to use the technology of sharding with a public testnet launched on March 31, recognizes also the importance of formal verification of smart contracts:

“One of the key issues that needs to be addressed is the security of smart contract applications running on public Blockchains. For any company to run any part of their business on a public Blockchain there needs to be infrastructure in place that prevents incidents like those with the DAO. Once the security issue is solved we may see more major companies start to publicly embrace Blockchain, which in turn may act as a catalyst towards more institutional investment.”

All these technological breakthroughs could arrive soon, potentially fixing the ‘Achilles’ heel’ of Blockchain, which is the above mentioned ‘trilemma’ of decentralization, scalability and security. However, since all these innovations are still not ready, the great majority of institutional investors, corporations and banks are waiting for these breakthroughs to really jump in, now they are just ‘dipping their toes’.

Once all the above mentioned trailblazing innovations are finalized and ready, and more countries follow pioneers in terms of DLT regulation such as Malta or Switzerland, institutional money could start pouring in. This could rise the price of Bitcoin and decrease its volatility.

“It was clearly a hype and FOMO [fear of missing out] was everywhere. But not from rational institutional investors, but retail investors chasing the quick money. There is no free lunch, so this correction was obvious for me. I even expected it earlier. Those investors burnt their fingers and are now too afraid to go back in this exciting new asset class and the expected institutional money has not flown in yet.”

Kenneth Rogoff, a Harvard economist has predicted that due to the volatility of Bitcoin’s price and the small number of use cases such money laundering and tax evasion mainly in his opinion, Bitcoin is more likely to be worth $100 in a decade than $100,000.

Rogoff also points out that the regulation of Bitcoin is also a big factor in his prediction, although he clarifies that only a global coordinated regulation could be effective. However, given that countries such as Malta are becoming pioneers in DLT regulation, it seems very unlikely that there will be in the future a global regulation unfriendly to Bitcoin.

Regarding the problem of Bitcoin’s price volatility mentioned by Rogoff, there are currently many projects trying to solve this issue. Cointelegraph talked with Alex Gordon-Brander, CEO of ConsenSys’ Omega One and previously at Bridgewater Associates, the world’s largest hedge fund, about what could help decrease the high volatility in crypto markets.

Alex wants his platform to become “regulated crypto agency broker” in order to “provide high-quality liquidity, enabling large sizes to be traded without moving the market, saving millions of dollars”, as well as to “offer regulatory compliance”.

“In the US, we’re probably at least a few months away from getting full regulatory clarity on the trading of digital assets, but the landscape is a lot clearer than it was.”

Therefore, since the underlying problems of Bitcoin mentioned by Rogoff – high volatility and unfriendly global regulation – are being addressed currently, this prediction could be proved wrong in the near future.

Prediction 3: Bitcoin’s price will follow a downward trend after the CME futures launch in December 2017

A popular cryptocurrency blogger predicted in a recent article that Bitcoin’s price will follow a downward trend based on the assumption that gold and silver prices have been suppressed for the last seven years, similar to other commodities after the futures market launch.

The following graphs show the prices of Bitcoin, silver, gold, and uranium, and developments for the starting date of the futures market for each. 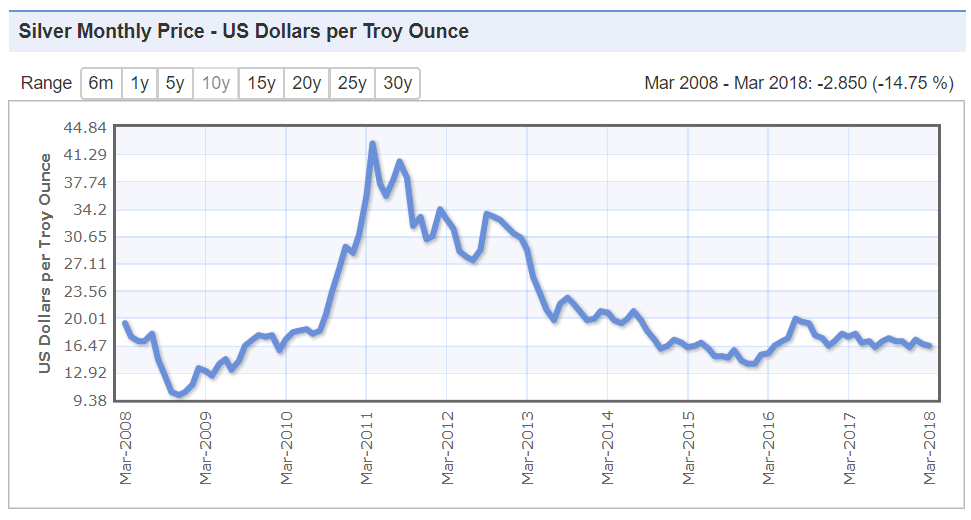 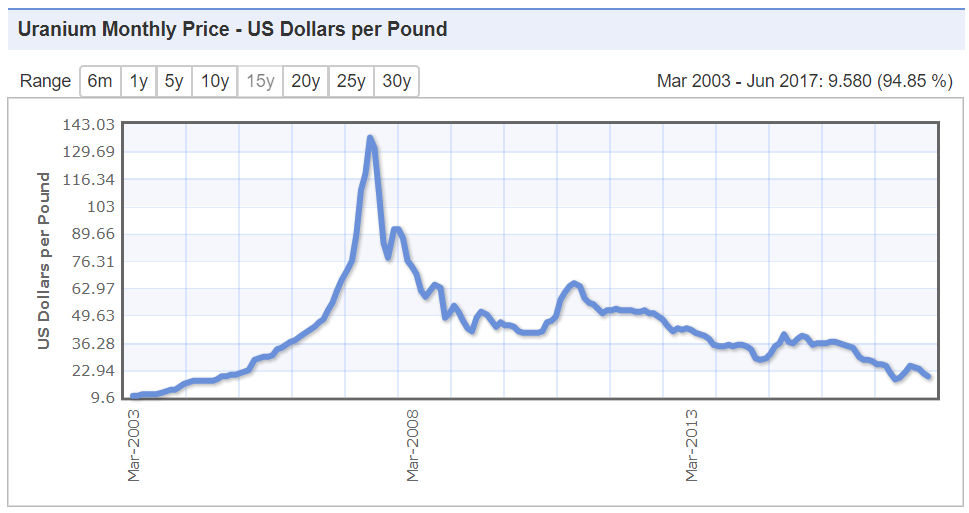 The author compares this with similar trends observed in the prices of silver, uranium or gold. Because the supply of Bitcoin is limited like other commodities such as oil, those in control of the supply can have a considerable effect in the prices, such as OPEC in the case of the oil markets. For example, a big buy or sell order in the current cryptocurrency markets can move Bitcoin’s price by a large percentage. The author believes that in this downward trend there will be short-term increases in the price, but overall Bitcoin’s price will continue to decrease.

He is optimistic nonetheless in the long term and mentions that, after reaching a very low price, the market will eventually turn, and he thinks Bitcoin’s price may reach $100,000. A big difference however from Bitcoin and the other altcoins compared to traditional commodities is that gold for example can be used as a store of value or to make jewellery, but Bitcoin and other cryptocurrency projects can potentially disrupt every single industry and institution.

Trying to control the prices of gold or oil and their supply seems a lot easier than doing the same for Bitcoin or other altcoins because innovation in cryptocurrency happens really fast, and there will be decentralized exchanges and many use cases that would bring a lot of interest and money.

The Bitcoin bull market last year, especially in the fourth quarter, was mainly triggered by irrational retail investors according to some experts, as mentioned above.

A lot of predictions about the price of Bitcoin in the short-term are not very optimistic by now, mainly because professional investors can now short Bitcoin for the first time after the futures market launch by CME and CBOE last December as was pointed out in prediction 3.

However, institutional investors and big corporations could be interested in the underlying technology and would be ready to start investing once the scaling, interoperability and other technological limitations of Bitcoin and DLT are solved.

A better legal framework and trading infrastructure could also become a motivational factor for the investors with more mature markets, lower volatility and improved liquidity.

In summary, while it may seem that “Bitcoin bears” have been winning since December, the coming regulations, innovations, better liquidity and lower volatility could favour the bulls probably starting at the end of Q2 or beginning of Q3 2018.