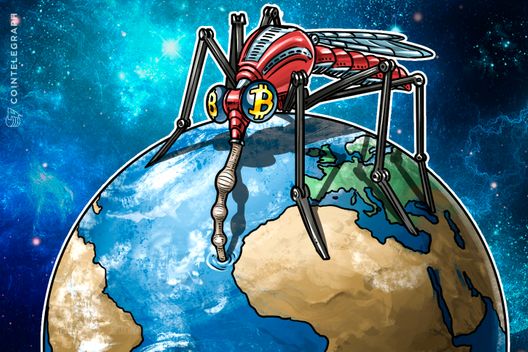 Economist Alex de Vries calculates the amount of energy used by specific Bitcoin miners in their lifetime, concluding that their energy use is a “big problem”.

Economist Alex de Vries, who published an article on “Bitcoin’s Growing Energy Problem,” yesterday, May 16, in scientific journal Joule, told the Independent that Bitcoin (BTC) mining will use 0.5 percent of the world’s energy by 2018.

De Vries concludes that as the BTC network currently consumes about 2.55 GW of electricity and moves towards consuming 7.67 GW in the future (for reference, Ireland consumes 3.1 GW and Austria 8.2 GW), the network “has a big problem, and it is growing fast.” However, he does note that solutions like the Lightning Network “may alleviate the situation.”

Bitcoin mining requires energy for performing the calculations – hashes – that give miners Bitcoin rewards. In mid-February, it was reported that crypto mining in the country of Iceland would consume more energy than households in 2018. The debate over whether Bitcoin mining is overly harmful for the environment is seen by some as a non-issue, due to the real need for Bitcoin in underbanked countries.

De Vries told the Independent, however, that “half a percent is already quite shocking:”

“It’s an extreme difference compared to the regular financial system, and this increasing electricity demand is definitely not going to help us reach our climate goals.”

The scientific study goes into detail about the different types of Bitcoin miners and their individual energy usage, noting that “trying to measure the electricity consumed by the Bitcoin mining machines producing all those hash calculations remains a challenge to date.” De Vries uses Bitmain’s Antminers as his main example to show how much energy each machine uses in its lifetime.

As De Vries’s study is the first time data on Bitcoin energy consumption has been peer-reviewed, he hopes his paper will “get the conversation started,” as he believes that the world needs “more scientific discussion on where this network is headed” as opposed to “back-of-the-envelope calculations,” he told the Independent.

Conversely, the technology behind Bitcoin, blockchain, is being used to alleviate environmental impact in some cases. This week, IBM announced a partnership with Veridium Labs with the aim of tokenizing carbon credits to allow companies to better track their carbon footprint through blockchain, potentially allowing them to reduce their carbon impact.