News from Goldman Sachs was among the factors contributing to another week of gains for Bitcoin, prices coming close to $10k May 4.

Bitcoin prices reached $9,786 Friday, May 4, as momentum continues to build for a challenge to resistance around $10,000.

This week has produced continued upside throughout the market, the news marked by a sudden announcement from Goldman Sachs that it has chosen to offer clients Bitcoin trading products.

Beginning with futures trading, these are due to start “within weeks,” an executive in charge of the project told the New York Times, with buying and selling likely to appear later.

Reacting to the plans, cryptocurrency industry figures appeared buoyant, entrepreneur Alistair Milne drawing comparisons to heightened market sentiment in December 2017 as the first regulated Bitcoin futures launched in the US.

Away from Bitcoin, Ethereum also produced significant gains this week.  The world’s largest altcoin by market cap reached a multi-month high, climbing over $800 today for the first time since March 6. 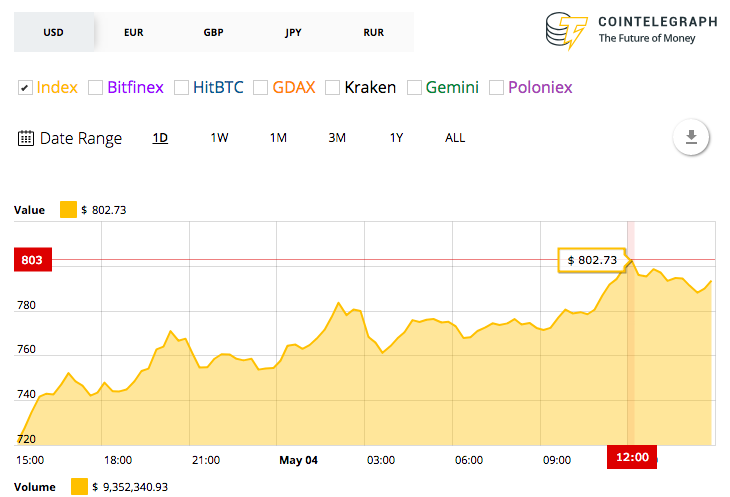 Investors have welcomed updates from Ethereum co-founder Vitalik Buterin, who earlier in the week released a proof of concept update for the network’s capacity expansion using so-called sharding.

ETH/USD was up over 10 percent in the past 24 hours, trading around $798 to press time. The coin’s monthly gains have surpassed a whopping 110 percent.

Elsewhere in altcoins, Ripple (XRP) is up almost 7 percent on the day, while Bitcoin Cash (BCH) posted only modest gains of about 2 percent in the same period.