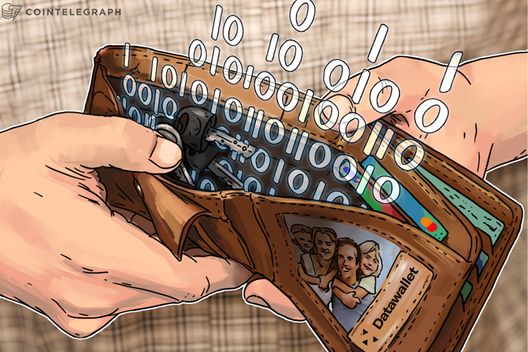 A company plans to help the public get paid for their personal information, all the while stopping businesses wasting billions a year on “bad data.”

A Blockchain-driven data exchange is warning that internet users are being “economically disenfranchised” by data brokers to the tune of thousands of dollars a year, and plans to create a self-sovereign wallet that puts the public back in control of their personal information.

Datawallet plans to help the public own and monetize their data, allowing them to decide who sees their information and which details they access.

It believes its solution has the potential to be a win-win for consumers and advertisers, with the company arguing that businesses are currently wasting hundreds of billions of dollars a year on “bad data.”

Datawallet says it has been “absolutely honored” that its white paper has been selected for presentation at this year’s International Joint Conference on Neural Networks (IJCNN.)

Through its platform, Datawallet says companies can access types of data that used to be “entirely inaccessible,” and this would be devoid of the biases regularly seen in the data captured through conventional means. To ensure that users are kept anonymous and their information remains secure, Datawallet provides data to companies in the form of “high-level analyses.”

According to Datawallet, its system could also prove useful and lucrative in a plethora of ways beyond advertising. The company says profiles on its platform could become a “passport for internet 3.0” – allowing users to fully personalize new services in an instant by sharing “a few relevant data points.” This is a far cry from the status quo, where it takes a long time for the likes of video-sharing sites and music streaming service to learn about a user’s preferences.

Datawallet believes its solution may even see car insurance quotes tumble as it would dramatically improve an insurer’s ability to assess risk and attract the best drivers – meaning safe motorists will no longer be penalized financially because they fall into a broad demographic which is generally regarded as high risk.

IJCNN, described as a “prestigious industry conference focused on the field of neural networks,” is taking place in Rio de Janeiro from July 8 to July 13.

Datawallet’s founder and CEO Lion Engel, who authored the white paper along with co-founder and chief technical officer Daniel Hawthorne and Alexander Norta, told Cointelegraph: “This recognition validates the work we’ve done to date and is further proof of what we stand for: real substance, uncompromising quality, and the long-term vision of building a data ecosystem that gives ownership back to users.”

Data to become “most valuable resource on Earth”

Research suggests that data worth $7,600 per US internet user is being sold every year. In four years’ time, when the company predicts data will be “the most valuable resource on Earth,” this figure is expected to rise to $10,100.

Public awareness about data being sold without consent – and the lack of transparency and accountability associated with these transactions – has been heightened following the scandal engulfing Facebook, where the data of tens of millions of people was improperly obtained by Cambridge Analytica, a political consultancy.

That controversy has seen the social network’s chief executive, Mark Zuckerberg, hauled in front of the US Congress, with senators demanding to know the extent of the information his company collects from users – and how data is subsequently used for advertising.

Datawallet’s app has already been launched, and it is available on Android and iOS – with would-be users told that the data on their Twitter, Instagram and Facebook profiles amounts to “gold just sitting in their pocket.” Marketing agencies, banks and appliance manufacturers are among the data buyers said to be already using the platform.

Datawallet’s initial coin offering sold out and successfully raised $40 mln. These proceeds are going to be put towards developing the company’s Blockchain marketplace.