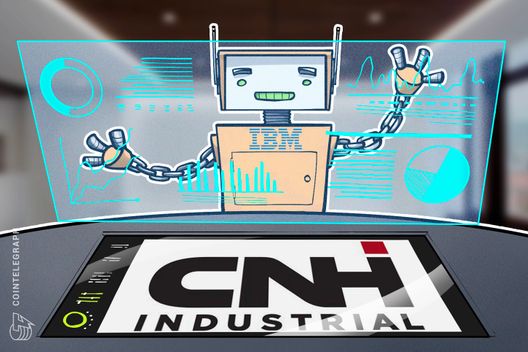 One of the world’s largest capital goods companies has agreed to a multiyear deal with IBM to implement blockchain technology, a press release confirmed July 26.

UK-based CNH Industrial, which owns twelve international brands including Iveco and Case IH, will seek to enhance a range of internal processes as part of “reviewing and optimizing its global activities.”

“Areas that will be directly enhanced include Supply Chain and the inventory management of the Company’s Parts & Service business, which will deliver ever greater service to its customer base,” the release states.

While details of the implementation remain limited, CNH will leverage IBM Blockchain, a bespoke platform based on Hyperledger technology delivered through IBM Cloud, which has seen implementations across global industry this year.

“This agreement marks a shift in the business to extensive Cloud implementation that leverages upon IBM’s Cloud Private Platform, while continuing to operate with IBM’s data centers and CNH Industrial’s on-premises IT infrastructure,” the company added.

Supply chain enhancement is an area currently receiving particular attention from a range of players, blockchain reportedly having a key role to play in reducing costs and timings while enhancing security. In January, IBM announced it would launch a dedicated blockchain-based supply chain company in conjunction with Danish logistics giant Maersk.