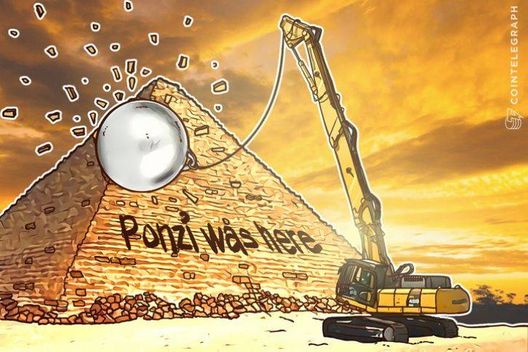 Chinese police have arrested four suspects in an allegedly fraudulent crypto scheme in the northwestern city of Xi’an that cost investors $13 mln.

Police in China’s northwestern city Xi’an have arrested a primary suspect and three accomplices for a suspected cryptocurrency “pyramid-scheme” that is alleged to have defrauded over 13,000 investors of ¥86 mln ($13 mln), local news reported April 18.

The chief suspect, identified by his surname Zheng, allegedly began preparations for the scheme in October 2017, which used an altcoin called Da Tang Coin (DTC) and is linked to Hong-Kong registered firm DTC Holding.

The firm is alleged to have promoted the scheme – which according to its description in reports may actually be more like a ponzi-scheme – widely, visiting Phnom Penh, Xi’an, Ningbo and other cities, promising investors ¥80,000 yuan (~$13,000) profits per day, as long as they invested ¥3 mln ($480,000) upfront in purchases of DTC coin, sold at ¥3 ($0.50) per token. According to local news reports, suspects succeeded to attract a high volume of investments over a very short period, between 15 and 28 of March, 2018.

Police also noted that the company hired a “foreign-looking” man to give themselves the aura of a Blockchain startup with international backing. Profits were promised from future DTC listings on established crypto-exchanges, and investors were assured the coin would soon have real-life applications in education and retail payments, according to the local news source.

Last year, over 47,000 people were duped by a fraudulent cryptocurrency multi-level marketing (MLM) scheme (similar to a pyramid-scheme) in China, leading to 37 arrests as of August 2017. In January this year, China’s Public Ministry of Public Security released a notice that outlined their agenda to “purify cyberspace” of crypto-related MLM schemes.