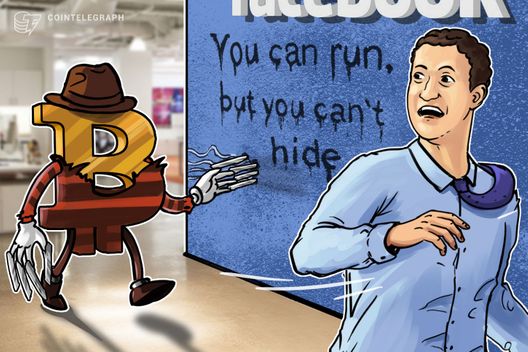 Facebook wants to protect you from crypto ads. But the company is in a bad position to make such choices for others.

The internet’s oligopolies are not fond of Blockchain. Early this year, Facebook broke the ice with instituting a blanket ban on all cryptocurrency and initial coin offering (ICO) ads; not long after, Google and Twitter followed suit. While the stated rationale for the ban is protecting users from “misleading or deceptive practices” that are “frequently associated” with the cryptocurrency business, industry commentators ponder on more mercenary considerations that could likely prompt tech platforms to enforce hostile policies. For one, cracking down on crypto is a relatively inexpensive way to alleviate the public’s wrath, as the narrative of the big tech’s lack of social responsibility is gaining traction in the background. Others in fintech view the ban as an outright manifestation of the Silicon Valley giants’ general antagonism towards the emerging Blockchain-powered economic and social ecosystems. After all, these ecosystems are informed and inspired by the ideas that are potentially threatening to their dominance in the long run.

Furthermore, the ban on cryptocurrency and ICO advertisements is not the only way Facebook is putting pressure on fintech enterprises these days. Consider this: for the most of 2017, Facebook’s rate of approval for Cointelegraph (CT) ads promoting individual articles plateaued at around 75 percent. Over the last few weeks, however, the rate plummeted to just 40 percent, without any notice from the company. It remains to be seen how many people have been saved from misleading and deceptive practices by the virtue of not being exposed to CT’s coverage of the Blockchain world.

Disheartening as it is, such a clampdown is hardly a deviation from how Facebook routinely does its business. For an organization that seeks to occupy a moral high ground as a users’ shield against endemic cryptocurrency fraud, Zuckerberg’s brainchild has for too long had a record of power abuse, arbitrary implementation of its own policies, abridgement of speech, and flippant ignorance of whole shady industries flourishing on its platform. Everything about Facebook, from this ever-expanding list of controversies, to consistently inarticulate and reactive fashion of responding to them, to failure to recognize, let alone address, many societal issues that the company’s operations have engendered, suggest that Mr. Zuckerberg is in no position to dictate what is best for protecting users.

Senator Hatch: How do you sustain a business model in which users don’t pay for your service?

Enumerating Facebook’s recent public blunders would be an utterly futile endeavor. The Cambridge Analytica story and the controversy around Russian trolls’ attempts to manipulate the US domestic political discussion became so high-profile than it is harder to be ignorant about them than otherwise. A point about Cambridge Analytica is that there has been a lot of confusion in media coverage of the matter. An insightful Medium post by Chris Kavanagh does a great job of dissecting the case. It suggests that in 2014, when the data on 87 mln users was made available to the voter-profiling firm, Facebook had a policy called “friends permission,” which allowed developers to legitimately access profiles of all their apps users’ friends. The only thing standing in between the swaths of user data and an army of brokers eager to put it to commercial use was the clause that prohibited developers from selling data to third parties. The enforcement of this policy, however, was lax, giving rise to a whole black market of user data.

This situation is quite indicative of the approach that Facebook adopted on many other instances: if it’s good for business but ethically dubious, let’s keep it in place until there is a really bad outcry over the dubious ethics or malicious outcomes. Recall the “fake news” hype of 2016: it took Donald Trump becoming president, as well as nationwide clamor over the alleged use of strategic misinformation helping him succeed in that, for Facebook to succumb into partnering with independent fact-checkers. It took a national controversy over suppression of conservative news in the “trending” section for Facebook to review the underlying algorithm. It took Cambridge Analytica to begin rethinking the relationships with data brokers and finally considering a possibility of providing outside academics some limited access to a share of the company’s data – researchers have been previously trying to gain some access to Facebook’s black box for years. In each case, these concessions look more like ad hoc public relations moves designed to appease the critics rather than the result of the company’s own drive towards a more responsible conduct.

In responding to mounting pressures from the public and to its own shifting economic priorities, the company often fails to show much concern about the way publishers are heavily reliant on Facebook-referred traffic. Tweaks to the news feed algorithm are at times as drastic as they are frequent. The latest turn towards showing more user-generated content is just another dot on this trend line that has now stretched for years. The platform authoritatively establishes new rules that affect the whole ecosystem, but could then roll them back. Publishers who run services on the Facebook platform that come to compete with some of Facebook’s own features might find themselves in trouble: for instance, soon after the platform launched their video service, it turned out that external videos get differential treatment on the website.

Meanwhile, structural problems that have not yet gained some shocking manifestation or a pointed enough criticism coming from agents of power remain generally below the radar. Despite the years of journalists and academics pointing out the dreadful impacts of the Facebook-led, ad-driven “attention economy” on the overall quality of news, as well as sustainability of local and investigative journalism, we are yet to see any policies addressing those issues beyond vague declarations. On another money-driven note, an enormous affiliate industry, a home for scams whose scale and insidiousness far surpasses what most cryptocurrency hoaxes have to offer, thrives under Facebook’s auspices.

In a more ostensibly political realm, in the process of what many on the right consider censorship, First Amendment-protected expression routinely gets taken down from the platform. But since it comes from the right and usually concerns speech that a middle-of-the-road user would likely consider offensive, no compelling pushback against such speech limitations is ever mounted. However, as we move away from the American shores, Facebook’s principled commitment to liberal values seems to be fading: there is little inclination on behalf of the company to somehow deal with strongmen like the Philippines’ Rodrigo Duterte weaponizing the platform against domestic opposition.

Senator Graham: You don’t think you have a monopoly?

Mr. Zuckerberg: It certainly doesn’t feel like that to me.

Mark Zuckerberg loves to wield the word “community” when talking about his company and its societal role. He used the word again when prompted to explain what Facebook in front of the Senate committee earlier this week. He elaborated on Facebook’s mission to build a “global community” in his lengthy February 2017 essay. His ambitious and somewhat starry-eyed vision, as some observers pointed out, was full of the notions of the potential for positive change yet strikingly devoid of notions of responsibility that comes with such a potential. Zuckerberg has been sticking to his favorite mantra of “we are just a platform and as such have nothing to do with content” for years, and it was not until the recent congressional hearings that he stumblingly admitted that some of responsibility lies with Facebook.

“Community” is a warm word that suggests inclusiveness and highlights horizontal bonds between people. But what kind of a community does Facebook really have, and how is this community governed? Some political scientists are not shy to use a metaphor of an autocratic sovereign state, with King Mark I at its helm. Indeed, Zuckerberg acts as both CEO and controlling shareholder of the company. Having experimented with embedding some democratic forms of corporate governance on the platform, Zuckerberg had abandoned such efforts back in 2012. He also made it clear repeatedly that he is not stepping down anytime soon. The larger the platform grows, the more rigid the structure of governance naturally becomes, while increased institutional inertia renders changes harder to implement. At this point, even if Zuckerberg suddenly embraces a brand new socially responsible agenda, there is no guarantee it would materialize in a few clicks. Still, when coming into Congress’ chambers, Zuckerberg was prepared to oppose any suggestions of the company’s breakup. His leaked notes even specified a patriotic objection to this idea, should it be voiced: such a breakup would strengthen Chinese competitors.

As any sovereign entity, Facebook is also firmly embedded into the political landscape. The fact that the company makes campaign contributions is unsurprising – in fact, those are fairly modest proportionally to the revenues that it commands. What is more interesting is that, according to academic research, Facebook (along with other tech firms) proactively maintains connections with political campaigns on both sides of the ideological spectrum, providing Republican and Democratic candidates alike with cutting-edge tools and expertise to help them make the best out of the platform’s political capacity.

This institutional embeddedness could be one of the reasons why Mark Zuckerberg emerged relatively unscathed from long hours of testifying before both houses of Congress this week. What some expected to become a public scolding has been essentially reduced to an introductory class on social media for the Senators on the Judiciary and Commerce Committees, and a somewhat more heated but still perfectly manageable exchange with House members. Along with producing a constellation of hilarious memes, the hearings posed a troubling question: if the US Congress is unable to corner Facebook’s CEO over what they see as a serious national security concern, then who can? Clearly, the people who are currently in charge of the country are out of step with the brave new world of Facebook politics. So far, the man who is in control of the world’s most influential communication infrastructure has not expressed an inclination to take advantage of their inability to check his influence. Yet, Zuckerberg’s term is unlimited, and the views of lifelong rulers are oftentimes prone to drastic change.

For those disillusioned with the current social media ecosystem and its leadership’s inability to address what is wrong with it, the Blockchain industry has a lot to offer. Steemit, even though not without its own drawbacks, has shown feasibility of the decentralized content production model. New journalistic enterprises such as Civil, DNN, and MediaSifter are putting up architectures that aim at fixing the broken news by using brand new incentive systems and collaborative fact-checking. As the dominant social media economy is undergoing a major crisis of trust, the Blockchain community should be out there, drawing in those who are looking around for an alternative.