A savvy strategy and innovative leaders may turn Wyoming into a crypto hub.

In the first month of 2019, the state of Wyoming has performed yet another series of power moves showcasing its continued commitment to becoming America’s new crypto hub, even despite recent changes in political leadership. The incoming governor, Mark Gordon, made room for some blockchain talk in his inauguration speech, celebrating the state’s innovative approach to regulation and touting a handful of homegrown startups. Over the next couple of weeks, Wyoming’s legislature erupted with a series of groundbreaking crypto-related bills that is only comparable to a similar wave in March of last year. 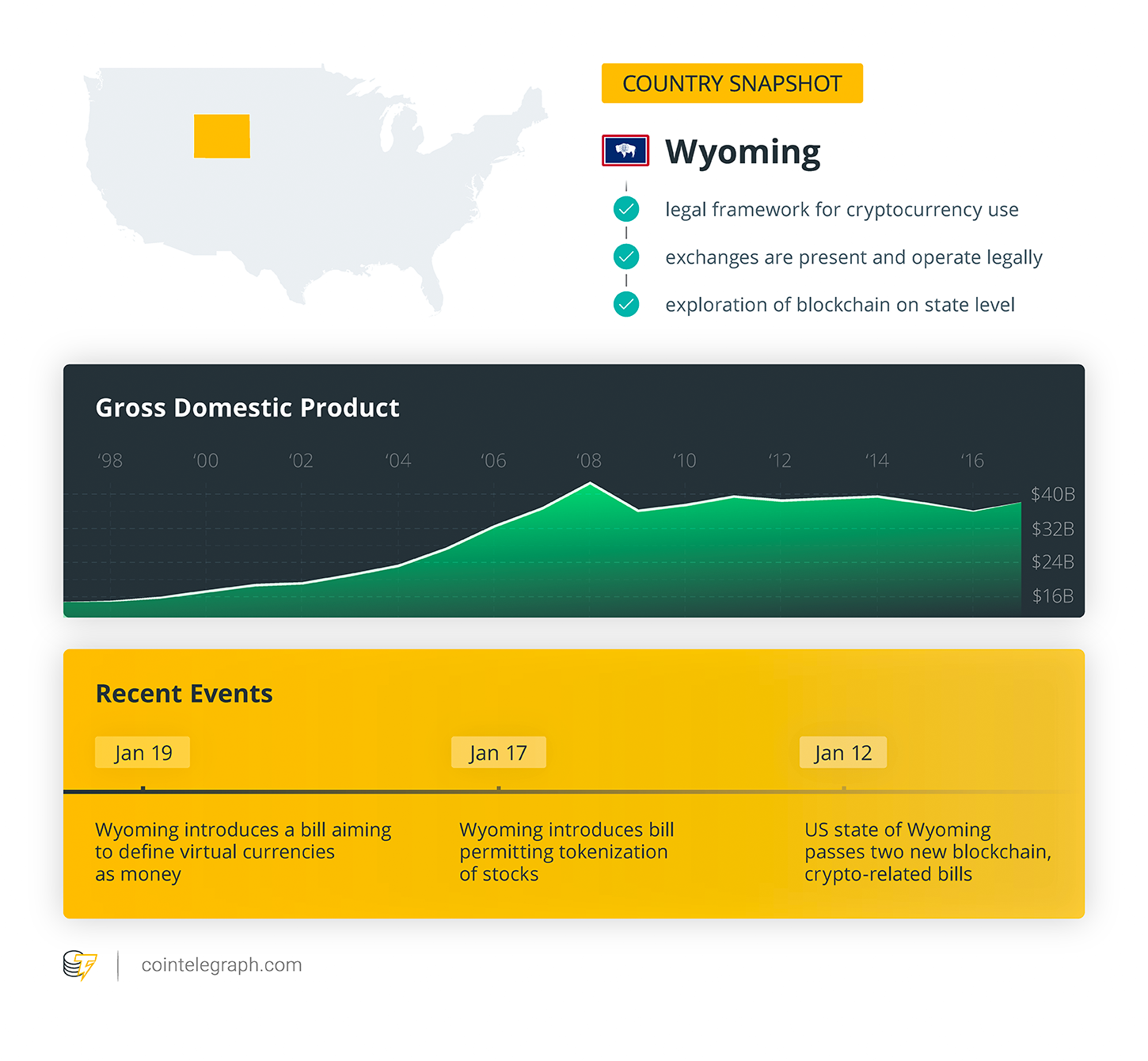 America’s least populous state, whose economy has been always skewed toward mining and agriculture, looks determined as ever to deliver on the promise to become the nation’s “crypto valley.” Consonant with this jaunty tune, blockchain startups have indeed started pouring into the area. Perhaps Wyoming’s biggest signing this year so far is the relocation of Iohk, the company behind the Cardano blockchain.

The sweeping changes that the Cowboy State’s lawmakers have recently passed or introduced as bills include defining three categories of digital assets and treating them as property; granting assets designated as virtual currencies the same legal status as money; authorizing banks to hold digital assets in custody; allowing corporations to issue certificate tokens that represent shares; and creating a regulatory fintech sandbox aimed at further diminishing any regulatory hurdles to industry startups. These developments look more radical than many of the other states’ recent blockchain-savvy moves, as they often explicitly challenge a variety of disparate federal approaches to crypto regulation.

Celebrating the news of another revolutionary piece of crypto legislation from Wyoming, one could wonder: Is this for real? Are they serious about this? What is it they are really shooting for? Putting Wyoming’s newfound crypto drive in a broader context could shed some light on how and why the state of ranchers and miners decided to boldly reach out to the crypto industry.

It is not unprecedented for a small state far removed from traditional technology and financial hubs to be courting a burgeoning new industry amid regulatory uncertainty — something that often happens after the initial period of explosive growth. Once a state is willing to tweak its laws to provide a greenhouse level of care and protection to a particular class of enterprises, moving from the comfort of coastal urban areas into some windy plains doesn’t seem like that much trouble any more.

An unlikely romance between Citibank and South Dakota provides a textbook example. In the early 1980s, when the initial gold rush of early credit card lending business began stalling under the weight of regulations — such as strict interest rate caps — policymakers in the Midwestern state saw their chance. Taking advantage of a Supreme Court ruling that allowed banks to charge the highest interest rate allowed in their home state, South Dakota introduced a batch of lax banking laws and invited banks to feel themselves at home. In 1981, Citibank was the first to respond to the call, bringing thousands of new jobs into the area. The city of Sioux Falls now has about 20,000 financial sector jobs, while South Dakota holds more bank assets than any other state.

Another place in the United States that definitely knows how to attract out-of-state enterprises is Delaware. Its hospitality extends beyond just tech businesses, or any specific kinds of businesses, for that matter — the state has long been known as a tax haven and is now home to almost a half of all U.S. public corporations. More recently, it has seen a surge in limited liability corporations (LLC) registration, thanks to relative ease of incorporation and a small flat LLC tax. Delaware also has a far-reaching statewide blockchain initiative, which apparently became the inspiration for one of the fresh Wyoming bills. Against the background of the already highly welcoming corporate climate, however, Delaware’s set of blockchain-friendly policies inevitably looks less salient than the Cowboy State’s legislative onslaught.

So, how exactly does the influx of digital-money businesses promise to benefit Wyoming? Perhaps the simplest hunch is that the state is looking to capitalize on registration and incorporation fees. Delaware’s example is enticing: Once you have a steady stream of newcomers from all over the place, you can enter a virtuous circle by keeping the fees low and attracting even more enterprises. State Rep. Tyler Lindholm, who has been behind most of Wyoming’s key blockchain legislation, openly admitted to looking at the Northeastern state as a benchmark, and noted that his state was making about $30 million in fees, against Delaware’s $1.2 billion.

If there is one thing that is potentially more lucrative than attracting a whole new industry to your jurisdiction, it is harboring a new industry that barely exists elsewhere. This is basically what the digital asset custody bill does. By authorizing banks to administer digital assets under the new regulatory framework, Wyoming sets out to reach an ambitious goal of enabling them to comply with the Securities and Exchange Commission’s (SEC) regulations for “qualified custodians.” This is nothing less than a bid to establish a regulatory environment that would allow for the entirely new class of services to emerge within the state: digital asset custody.

It is worth noting that Wyoming’s attraction to blockchain technology is not a standalone phenomenon, but rather a part of a larger effort to diversify the economy. The official commitment to expanding the state’s technology sector is at least seven years old, while the Economically Needed Diversity Options for Wyoming (ENDOW) program was established in 2017. It was the ENDOW executive council that included recommendations for legislative action on several technological initiatives last year, including a series of blockchain-related bills.

One more reason to double down on blockchain liberalization has been the flight of money transmitters from the state over the last few years — and the need to get them back.  Contrary to the proclaimed tech-friendly spirit, the Wyoming Money Transmitters Act, which was passed in 2011 and came into full effect in 2014, imposed cumbersome licensing requirements on crypto exchanges. This forced Coinbase and a handful of others to halt their operations in the state by 2015. The series of laws enacted last March included provisions that crypto exchanges be exempted from the money transmission laws. A few months later, Coinbase returned to Wyoming.

If some important legislative developments have taken place somewhere in the U.S., probably someone has lobbied for it. Lurking behind all the news reports of Wyoming’s blockchain regulation advancements is the group called the Wyoming Blockchain Coalition, as well as the names of several of its prominent members. Among them, Caitlin Long is the undisputed headliner.

A Wyoming native with a passion for “honest ledgers,” Long spent more than two decades working for the likes of Morgan Stanley before heading the blockchain startup Symbiont. Having realized that she couldn’t legally donate to the University of Wyoming in crypto, Long got the idea that the state law could use some improvement. That’s how the Wyoming Blockchain Coalition came about. Consisting initially of Long and a few of her friends, the group eventually drew in many of the state’s forward-thinking notables. Their names can now be found among those who sponsored the groundbreaking bills.

Not only are some state politicians members of the coalition, they are also personally invested in local blockchain enterprises. Sen. Ogden Driskill became involved last year with BeefChain — a Wyoming-based startup that is building an immutable ledger designed to track free-range cattle. Another legislator who often makes headlines in crypto media, Rep. Tyler Lindholm, acts as the chief of ranching operations for the same company.

It appears that Wyoming’s impressive push for blockchain leadership relies on several major ingredients. There is evidently a consensus among the elites as to the urgent need for expanding and promoting the state’s technology sector — and somehow they decided that the trendy distributed ledger technology might be their best bet. There is also a tried and tested strategy for small states that are eager to get ahead: tailoring legislation to the needs of whomever they are betting on. Yet, even when all the structural factors are in place, things are unlikely to work unless there are leaders on the ground, who value and understand the innovation they are pushing for. With the blockchain-savvy ranchers of Wyoming, this seems to be the case.