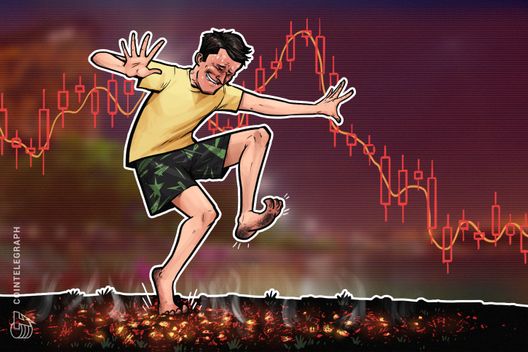 Bitcoin is hovering a bit below $9,000 today, as the crypto market sees a mild correction across the board.

The crypto markets are seeing a slight correction, with Bitcoin (BTC) dropping below $9,000 today, May 1, according to data from Cointelegraph’s price index. The markets followed suit, with all but one of the top 10 coins in the red.

BTC is currently trading at around $8,995, down just over 2 percent over a 24 hour period to press time.

Ethereum (ETH) is slightly down as well, trading at around $664 by press time, down over 3 percent over a 24 hour period. Of the top ten coins on CoinMarketCap, only altcoin Stellar (XLM) is in the green. XLM is trading at around $0.44, up over 3 percent on the day to press time.

Bitcoin Cash (BCH) is down the most of the top 10 coins, seeing 6 percent losses over a 24 hour period and trading for around $1,305. BCH’s downturn could be attributed to the news of a newly established group of Bitcoin supporters that plans to file lawsuits claiming that Bitcoin.com is misleading crypto traders into buying BCH when they mean to buy BTC.

Litecoin (LTC) founder Charlie Lee weighed in on the issue on Twitter, at first calling the lawsuit “stupid,” but then changed his mind after a change was made to the Bitcoin.com website:

I retract my statement calling the lawsuit stupid. I just found out that Roger has changed the website back to listing bcash as “Bitcoin Cash (BCH)” instead of just Bitcoin. So for that, the lawsuit has already done some good. So carry on!

IOTA is now ranked in 11th place on CoinMarketCap after the Financial Times (FT) reported last week on multiple online harassment allegations against the IOTA Foundation, news which evidently led to the University College London cutting ties with the foundation, citing their commitment to “open security research.” IOTA has lost 13 percent since April 25, when FT published their article. Today, the coin is down 3.45 percent, trading at $1.90.