As Bitcoin and cryptocurrencies gain more and more media coverage, investors who have never been involved in crypto are increasingly asking the question of whether cryptocurrencies could provide meaningful portfolio diversification to the traditional portfolio asset allocation.

In order to answer this question one must look both backwards and forwards: backward looking to determine past correlations and risk-reward profile; and forward looking to understand the real risk of central bank policy mistakes and government debasement of fiat currencies.

Diversification of portfolio focuses on how the volatility of an underlying security plus their correlation with core market assets impacts a portfolio’s risk-return characteristics over the long-term or during periods of extreme macroeconomic or market stress.

Academic research has shown that investors prefer outcomes with known probability distributions compared to outcomes where the probabilities are unknown. Historical analyses of Bitcoin and gold returns vs. equity market returns at times of recent market volatility may provide some indications as to past data, but there is still insufficient information about how to conclude that the leading cryptocurrency could reliably act as a safe haven. With regards to risk-return profile there is no other asset in the world that has matched bitcoins optionality.

Bitcoin has demonstrated a near-zero average correlation with other asset classes over the past five years, compared with a small average positive correlation that some other traditional hedges like inflation-linked bonds, commodity indices, gold, the Japanese yen and Swiss franc often exhibit with other capital market assets.

Diversification in portfolios is based on correlations and historically many assets were negatively correlated. One of the negative side effects of trillions of dollars of Quantitative Easing (QE) is that the price discovery mechanism is distorted and that traditional asset class volatility has been suppressed by large amounts of short volatility strategies implemented by investors looking for yield enhancement in low interest rate world.

Bitcoin as a hedge against Central Bank bubble

Central banks, before QE became the norm, were considered to be the “lender of last resort”. In the experiment of unconventional monetary policies however, the central bank has become the “buyer of the first instance”.

U.S. Monetary Base and its increase since the birth of Bitcoin in 2008

The U.S. is about to follow an unprecedented experiment in monetary policy with an unprecedented experiment in fiscal policy – “Trump tax cuts.” This new environment could challenge investors, as traditional asset class relationships might be less stable. Historically, investors could expect stocks and bonds to trade in opposite directions. The February stock market sell-off was triggered by a sell-off in the bond markets and both bonds and stocks fell at the same time. A lot of traditional bankers and analysts have pointed out that Bitcoin might be in a price bubble but this raises the question of whether stocks and bonds in public markets are not in even more of a bubble. 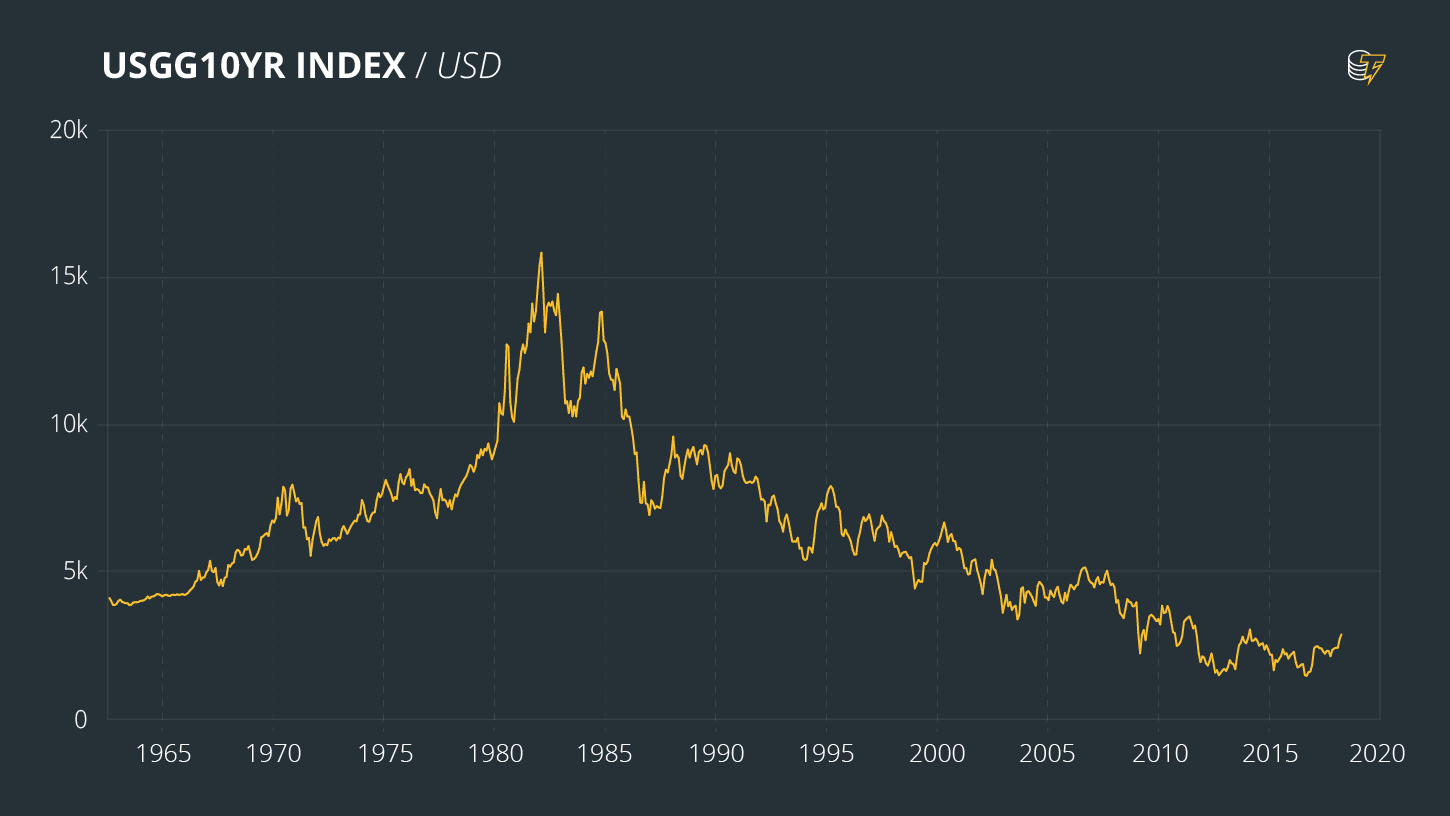 The Federal Reserve and the European Central Bank (ECB), coupled with the Bank of England and the Bank of Japan have expanded their central bank balance sheets to unprecedented levels. The argument of equities are cheap because bonds are even more mis-priced is at the root of this distortion.

Bonds are safe and сrypto is “risky” narrative

Paul Tudor Jones, one of the fewer people on Wall Street who correctly predicted the Crash of 1987, recently opined that

“We are in the throes of a burgeoning financial bubble […] If I had a choice between holding a U.S. Treasury bond or a hot burning coal in my hand, I would choose the coal.”

While this might be a rather colorful description to indicate an “underweight” bonds view it shows that to some investors traditional bonds might not be safe after all.

“’We are in a bond market bubble’ that’s beginning to unwind”.

To many traditional investors bonds as an asset class is safe due its low volatility and due to the belief that debt markets are efficient and can always re-finance and roll over debt.

Cryptocurrency markets on the other hand are still considered by many to be unsafe and not appropriate for the average investor due the asset class being less efficient and very volatile.

The focus of many traditional investors is that Bitcoin is very volatile even though US dollar price swings volatility has been predominantly to the upside. The one year return of BTC has risen 811 percent against the world’s reserve currency.

Unless you really understand the structure of the globally distributed censorship resistant immutable crypto market, it’s a little bit of a fool’s errand to focus solely on what the US dollar price of Bitcoin is.

Noted global investor George Soros attributed his stellar investment performance over 50 years to the insight that while many play the game of investing but the rules, he was looking for changes in the rules of the game.

An asset allocation investment decision into cryptocurrency is such a bet that the rules of traditional finance will change.

The most important question as to the rules of investing and global financial architecture was recently posed by ECB President Mario Draghi.

In January Draghi hit out at US Treasury Secretary Steven Mnuchin’s claim that a weak U.S. dollar was good for the American economy, saying the Trump administration needed to uphold the rules of the international monetary system, which forbid nations from deliberately devaluing their currencies.

The extent of European officials’ concerns over the weakness of the U.S. dollar and whether Washington adheres to the rules of the (current) international monetary system are very valid and are related to the question about cryptocurrencies as a portfolio diversification.

If you think the (current) rules of international financial system will always stay the same, then there is no need to have any bitcoin or crypto as part of your strategic asset allocation.

And if you believe that global debt levels could become unsustainable and the U.S. dollar and other fiat currencies could face debasement then you cannot afford not to have crypto as part of strategic asset allocation.

Earlier in 2017, the managing director of the International Monetary Fund (IMF), Christine Lagarde made the same point when she said that crypto assets should not be dismissed outright by governmental structures around the world as cryptocurrencies are positioned to provide conventional government-issued fiat currencies a “run for their money”.

“Instead of adopting the currency of another country – such as the U.S. dollar – some of these economies might see a growing use of virtual currencies. Call it dollarization 2.0. So in many ways, virtual currencies might just give existing currencies and monetary policy a run for their money. The best response by central bankers is to continue running effective monetary policy while being open to fresh ideas and new demands, as economies evolve.”

United States: In debt we trust?

The United States is the largest debtor nation in the history of mankind and its currency the U.S. dollar is both the world’s reserve currency as well as the anchor of the current debt based fiat currency reserve banking system.

Bitcoin and other cryptocurrencies on the other hand are an asset based system in the same way that gold is the only major asset where you do not have any counterparty risk. Your physical gold or digital Bitcoin is nobody else’s liability.

Hence it is understandable that those who administer the fiat money of the state would like to see increased regulation of the money of the people. Free choice in markets like in democracy is not always a given.

Gold is inversely correlated to confidence in the financial and political system.

Gold is independent from the nation state government and the banking system and its scarcity created tremendous financial value. The same line of thinking increasingly is underpinning the HODL mentality of Bitcoin as a strategic asset allocation decision.

In a world where too much debt and potentially unsustainable debt, coupled with fears of a U.S. trade war with its largest creditor, China could lead to inflation expectations rising.

In such an environment, a true deflationary asset like cryptocurrencies is the ultimate portfolio hedge.

Gold for over 6,000 years and Bitcoin since at least 2013 is inversely related to confidence in nation state fiat currency based banking systems.

The reason why Bitcoin in many countries around the world trades at premium to the global average is due to the fact that in many developing countries many citizens do not trust neither the government nor their central bank nor do some citizens necessarily believe that local paper currency in a bank where you are exposed to bank counterparty risk is necessarily the best store of value.

Some traditional economists and mainstream bank CEOs have opined that Bitcoin has failed because so far we have not seen meaningful everyday spending done in BTC nor other cryptocurrencies.

Traditional economists who publicly say so might have forgotten about Gresham’s law. In economics, Gresham’s law is a monetary principle stating that “bad money drives out good”. For example, if there are two forms of money in circulation, which are accepted by law or the market as having similar face value, the more valuable money will disappear from circulation. In today’s world the manifestation of Gresham’s law is Bitcoin HODL.

Money is the ultimate network effect and this could be one reason why some government officials are concerned about the possibility of mass adoption of cryptocurrencies.

The upcoming G20 Meeting of Finance and Central Bank Deputies in Buenos Aires from March 17 to 18 has Bitcoin and cryptocurrency regulation as top agenda item. It is quite telling if not ironic that the finance and central bankers of developed countries – who oversee highly indebted nation state currencies – have a discussion about regulation of the “money without a state” in a country that has countless times failed their own people.

Argentina as a country is the poster child as to why there is demand if not a real need for a currency that a government cannot control nor manipulate nor debase.

Wences Casares, the founder of bitcoin wallet XAPO and his family in Argentina were one of these unfortunate people and that gave Mr. Cesares the conviction not only to consider the leading cryptocurrency as a portfolio diversifier but to make Xapo and its secure vault storage a key part of the Bitcoin blockchain ecosystem.

Bitcoin and cryptocurrencies have evolved from a mere curiosity in 2009 to a legitimate investment case in 2018 and beyond.

They are the summit of decentralization of counterparty risk and an escape from highly indebted nation state fractional reserve banking system. Take that into account, for when the international monetary system needs to be re-anchored and what that could mean for your life savings and strategic asset allocation.

The views expressed here are the author’s own and do not necessarily represent the views of Cointelegraph.com