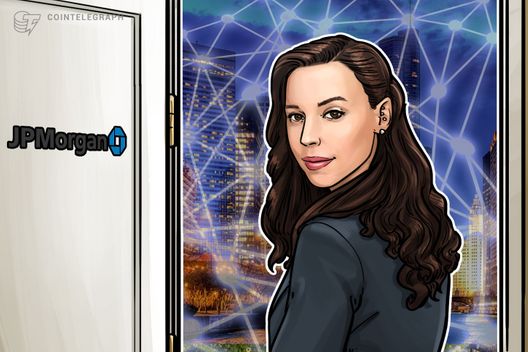 Amber Baldet has left her position as the head of JPMorgan Chase’s Blockchain Center of Excellence for an as-of-yet unknown new venture.

Fortune’s “40 under 40” describes Baldet as a “regular at hacker conferences, [who] handily bridges the divide between Wall Street and the crypto set.”

Baldet has not given any news of what her new venture will be, beyond posting Fortune’s article about her decision to leave JPMorgan on Twitter:

Baldet had been the lead for project development of Quorum, JPMorgan’s Blockchain and smart contracts platform, as well as working on the firm’s overall Blockchain technologies strategy.

Jessica Francisco, a JPMorgan spokesperson, told Reuters that “Amber is extremely talented and helped build the outstanding team we have today. We respect her desire to start her own venture and we wish her nothing but the best.”

According to a letter obtained by Fortune from Umar Farooq, head of JP Morgan’s Blockchain Initiatives, Baldet had been “an integral part of developing our [Blockchain] capabilities and helped build out the BCOE and the outstanding team that we have today. We thank her for her leadership and contributions to the CIB and the firm.”

Baldet will be replaced by Christine Moy, a senior product manager at the Blockchain Center of Excellence. Farooq wrote in the letter to the BCOE staff that Moy has “has worked with Amber and the BCOE from its inception and is a [Blockchain] thought leader:”

“Most recently, she has been leading [Blockchain] product development across our Investor Services and Capital Markets businesses. We are thrilled to have such a strong successor in our ranks.”