And the possible explanation of mixed signals by polish CB.

On the list of anti-cryptocurrency countries, Poland has never really stuck out. In fact, there has been enough evidence to suggest that the Eastern European country was moving towards embracing Bitcoin and Blockchain technology.

However, a recently uncovered smear campaign by the NBP (National Polish Bank, or Central Bank) has thrown that all out of alignment. The NBP has admitted to paying a number of YouTubers a sum of about $21,000 in order to dissuade Polish citizens into buying cryptocurrencies for fear of losing all their money.

The NBP has called this an ‘educational campaign’, trying to get across the dangers of cryptocurrencies, but it has come across more as a smear campaign which raises questions about the Polish government’s view of cryptocurrencies.

Poland, along with a number of EU countries, has never shown any true discontent for cryptocurrencies prior to this latest campaign to discredit them. Back in 2013, there were reports of an official from Polish Ministry of Finance saying, “What is not forbidden is permitted. However, we certainly cannot consider Bitcoin to be a legal currency.”

In 2015, the Polish Finance Ministry issued a statement to the effect, “Any regulatory action addressing the problems of trading virtual currencies. They should be taken either as a result of initiatives at the EU level with a view to the cross-border nature of the business or as a result of a threat market failure cryptocurrency.”

In an interview around February 2015, Filip Godecki, CCO of Bitcurex, a major Polish cryptocurrency exchange, explained the government’s stance as neutral: “From our perspective, it would be difficult to talk about a negative trend. The attitude toward Bitcoin in Poland is neutral, converging with tendencies in most EU countries. Institutions are looking at the project from a certain distance, waiting for what comes next. The situation is similar with banks.”

In February 2017, trading of Bitcoin and other cryptocurrencies was officially recognised in the country. It was stated on a governmental website that from Dec.1, 2016, “The issuance of electronic currency and purchase and sale of electronic currency via the internet stand classified by official statistics services in Poland.” While there may be no definitive stance on Bitcoin and cryptocurrencies coming out of Poland, the government has seemingly allowed it to exist and continue functioning.

One of the bigger indicators that the Polish government was leaning towards being Bitcoin friendly was when in March 2017 it released its Best Practices document to promote digitization of the national cryptocurrency market and help startups establish themselves in the market.

These guidelines were followed by several other programs aimed at promoting cryptocurrency technologies, such as the Ministry of Digitization’s “Blockchain / DLT Stream and Digital Currencies” program.

Еven more telling is that many well known cryptocurrency businesses set up shop in Poland over the years because the banking system was so welcoming and a lot more liberal than many others in Europe. Even the British stock exchanges and even the infamous Mt.Gox had their financial backing set up in Poland.

Despite Poland making no final call on its perception on Bitcoin, Blockchain and the entire cryptocurrency market place, there is evidence that the government sees potential and possibility in it. It therefore is very surprising that the Polish central Bank has launched this smear campaign that was partially hidden, but also unashamedly done.

Speaking to Cointelegraph, Polish Journalist and Youtube-blogger Karol Paciorek briefly explained the math between this campaign:

“There was a product placement deal between NBP and three large youtube channels: Marcin Dubiel – 937,000 subscribers; Wiśnia – 818,000 subscribers; and Planeta Faktów 1 mln subscribers. It’s an educational campaign paid from a government-based organisation. Someone asked NBP how much they have paid for the campaign, and got an answer – $21 000.”

The issue is that these videos are very slanderous of Bitcoin, and could hardly be called educational in the real sense of the word. Furthermore, there was no indication that it was a paid-for, or sponsored, video.

Another blogger, Maciek Budzich from the Mediafun Blog, has also written about the strange sponsored videos and their effect on the perception of cryptocurrencies in Poland. Budzich shows the actual response from the NBP when asked about the campaign, it details information including the figure spent. In Poland, every citizen has the right to ask the state authorities (as part of access to public information) about money and state spending. 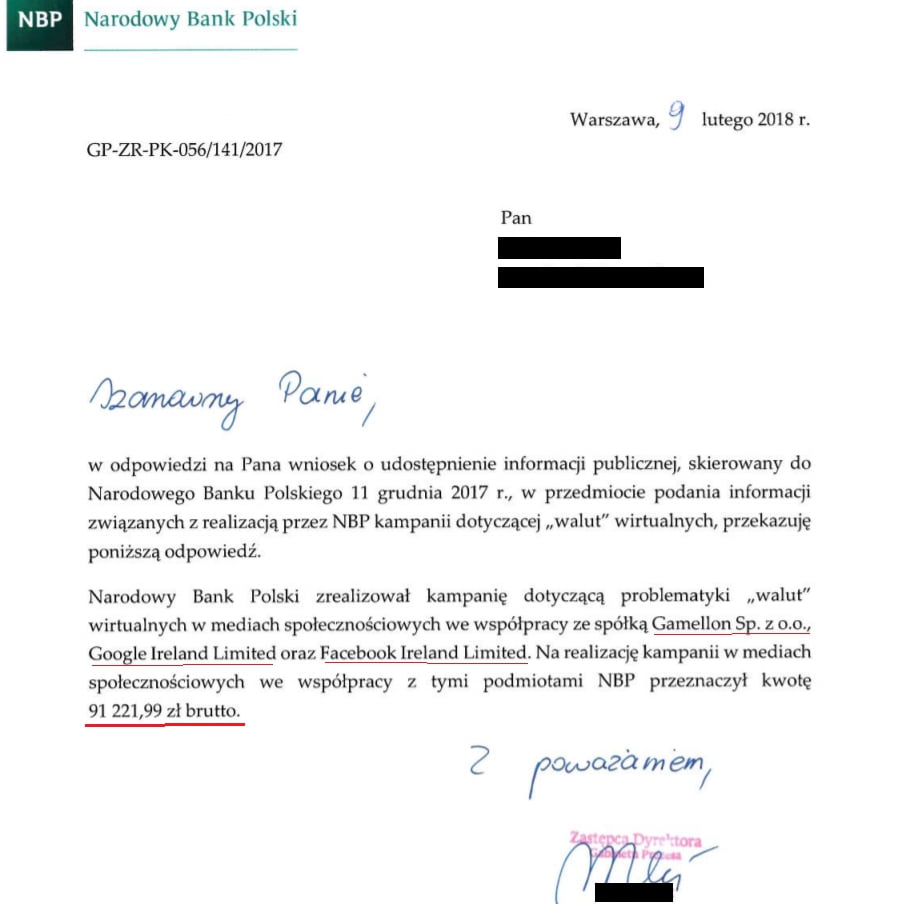 Budzich states he is uncertain of the letter’s authenticity, but takes it as true pending any response from authorities. It has also appeared on other sources. It transpired, through Budzich, that Gamellon, a Youtube network partner company was the recipient of the state funds and that they had connections with some of the Youtube channels that were used. The only confirmation he got was that Gamellon cooperated with the NBP, but refused to share further details, and would not divulge the provisions of the contract.

The evidence is clear that the Central Bank worked towards smearing cryptocurrencies on these Youtube channels which raises questions about the stance Poland will take when it does come down to regulating digital currencies in the country.

There is further, tangible, evidence of the NBP’s thoughts on digital currencies with their information portal, which is labeled: “Virtual currency is not money.” It’s frontpage states:

“This is a digital implementation of a contractual value between two users that is not issued and is not guaranteed by any central bank of the world, such as Polish zloty, which is issued by the National Bank of Poland. Another risk is the lack of universal acceptance of such cryptocurrencies. Virtual currencies are not accepted in all retail stores and services. They are not a legal tender or currency.”

What effect did this have?

The campaign certainly got noticed, but probably for the wrong reasons as most media sources reported on the secret funding aspect, rather than the ‘educational’ campaign. In Poland, when the news broke that the Youtube videos were paid for by the NDP, the reaction among the country’s crypto community was one of anger.

Speaking to Cointelegraph, a local Polish cryptotrader going by the name of Crypto Polish Guru on Twitter, gave some insight:

“People are angry about this action, or they ignore it, the young people, that is. Older people don’t watch Youtube! In my country, citizens do not like the government anyway.”

The advancement of Blockchain and fintech in Poland is also a bit stop-start according to Crypto Polish Guru.

“We have the Ministry of Digitization, but Minister Anna Streżyńska was dismissed two or three months ago. She created a Blockchain group to work towards building a good environment for crypto in Poland, for me that was one of our best ministers. Now I think that they will liquidate the Blockchain working group.”

The NBP’s decision to launch a biased and convoluted ‘educational’ campaign based on the danger of Bitcoin is what is drawn into question here. It would be understandable and agreeable if they were to issue a statement, like they have done, about what cryptocurrency is and is not, but it seems strange that their attempts to get their warning across came over as such fearmongering.

There was no link back to the NBP from the Youtubers, there was no ties from the videos to the bank. The connection only emerged when the NBP was queried on whether or not they were bankrolling the campaign. This calls into question the tactics of the central bank, and its motives in getting its point across in such a way. It also raises questions about how Poland will be regulating cryptocurrencies in the future.

Although the campaign was not broadcasted and advertised as a sponsored campaign by the NBP, they have never been afraid to furnish details of their so-called educational campaign. Tomasz Jaroszek, writing for doradca.tv, much like Budzich also questioned the NBP, and demanded a response, which he got.

The NBP’s rather lengthy response defends their efforts in educating the Polish population on the dangers of cryptocurrencies, going to list a number of fair dangers, such as volatility and no central backing and cyber crimes.

The NBP begin their gambit putting into context their authority to lead this campaign as they state they were carrying out their “constitutional and statutory tasks” for the sake of the “value of Polish money, and the stability of the Polish financial system.”

Following the listed reasons of the dangers of cryptocurrencies the NBP then goes on to direct attention to a warning they put out in June last year before explaining the December campaign:

“The goal of the information campaign conducted since December 2017 is to reach the widest possible audience, potentially interested in using virtual currencies – including people who have no experience in risky investing – with basic knowledge about the risks associated with investing in cryptocurrencies. This campaign hopes to make people interested in investing in cryptocurrencies refrain from actions that could bring them measurable losses, or if they will consciously take such actions, assume the risks associated with them. The NBP decided to conduct a campaign via the media – digital and traditional.”

The caveat however is that the NBP openly admitted it is not opposed to Blockchain technology, seemingly indicating this was not aimed to be a smear campaign:

“At the same time, we emphasize that the NBP is not opposed to the development of Blockchain technology and its use, but the application of this technology to the financial market must be just as safe and proven as it is with other technologies.”

It is hard to understand the NDP’s decision to act in such a manner. Clearly they have a duty to inform about the dangers of cryptocurrencies, but the campaign they went on seems confusing.

Crypto Polish Guru’s closing remarks on why this played out in the way it did may have to do with a time when the NBP did not react.

“A few years ago in my country we had a large affair with Amber Gold – a company offering a high percentage returns for deposits made with them [essentially, a pyramid scheme]. It ended up going bankrupt and all investors lost all their money. At that time, the NBP, and other institutions didn’t react at all and they were strongly criticized.”