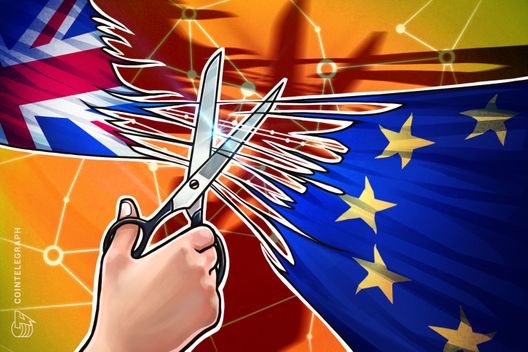 The U.K. has been a leader in the CMU initiative, but now with the Brexit deadline approaching, it plans to implement its own crypto regulations before 2019.

In our Expert Takes, opinion leaders from inside and outside the crypto industry express their views, share their experience and give professional advice. Expert Takes cover everything from blockchain technology and ICO funding to taxation, regulation and cryptocurrency adoption by different sectors of the economy.

If you would like to contribute an Expert Take, please email your ideas and CV to george@cointelegraph.com.

The United Kingdom and the European Union failed to reach an agreement on an orderly uncoupling, which is a major geopolitical and strategic event, with global implications. Uncertainty about the outcome of the Brexit referendum has already started to weaken growth in the U.K. — which is expected to get worse, based on a highly classified cabinet briefing, with economic fallout in the rest of the Organization for Economic Cooperation and Development countries. The International Monetary Fund said the EU could lose as much as 1.5 percent of gross domestic product from a “no-deal” Brexit, while the U.K. would suffer an even bigger hit — a 4 percent loss of national income.

Membership of the EU, including the ‘‘The EU Blockchain Observatory and Forum,” with EU’s fintech market valued at $6 billion, has contributed to the economic prosperity of the U.K.  ‘‘Digital technologies like blockchain can be game changers for financial services and beyond,’’ explained Mariya Gabriel, Commissioner for the Digital Economy and Society. Kay Swinburne, a member of the European Parliament (MEP), agrees on blockchain’s utility, but is nevertheless convinced that London’s fintech sector can ensure its future without the EU Blockchain Observatory Forum and without relying on an equivalence for mutual access to EU markets after the country leaves the trading bloc. Because, the U.K. and its territory Gibraltar — the age-old tax haven that has repositioned itself as the new crypto venue of choice — have already created separate virtual currency and blockchain technology initiatives as strategic tools for income growth and national competitiveness. The U.K. has also negotiated a unique deal for uninterrupted access to the EU’s Galileo satellite system in order to sustain their digital economy post-Brexit.

David Coburn, the MEP who foresaw the occurrence of Brexit as a result of EU’s Capital Markets Union initiative said, “I am looking forward to Brexit. Tax competition is healthy.”

Brexit and the EU’s cryptocurrency and blockchain legislative initiatives

22 out of 28 EU member states — including the U.K. — have signed on to the EU’s blockchain partnership to share experiences and exchange expertise in technical and regulatory fields and prepare for the launch of EU-wide blockchain applications across the Digital Single Market for the benefit of the public and private sectors. Croatia, Cyprus, Denmark, Hungary, Italy and Romania have opted out.

The EU has been pushing for cryptocurrency regulation at the European and even G20 level, coordinated by the OECD, taking it’s regulation out of the control of member states. The EU also took the lead in proposing an EU-wide digital tax ahead of the OECD. All the while, EU member state cryptocurrency classifications for income tax and for VAT purposes, as well as their taxation, vary widely from member state to member state, with cross-border tax applications as detailed in current tax treaties remaining uncertain. These multiple tax issues are compounded by the individualized implementation of the EU’s Anti-Money Laundering (AML) laws by member states that will likely create barriers to pan-European blockchain implementations — as pointed out by Carlos Torres, CEO of Spanish bank Bilbao Vizcaya Argentaria (BBVA), who, after issuing the first blockchain-based loan, cautioned that blockchain technology is ‘‘not mature’’ and faces major challenges, including the ‘‘volatility of underlying cryptocurrencies’’ and possible compatibility issues with tax authorities and financial regulators.

The EU unveiled its plan for a Capital Markets Union and a single market for technology-enabled innovation in financial services, with EU-level legislative proposals to enable the financial sector to make use of the rapid advances in new technologies — including in blockchain, artificial intelligence and cloud services — to lower the cost of funding and make the financial system more integrated and resilient in the event of another financial crisis.

Petru Sorin Dandea, of the European Economic and Social Committee explained that “fintech players should be subject to the same rules as the financial sector.” He believes that the Digital Single Market plan could be instrumental in deepening and broadening the capital markets by integrating digitization, which could serve as a stimulus for fintech.

The U.K. has been a leader in the CMU initiative, but now with the Brexit deadline approaching, it plans to implement its own crypto regulations before 2019.

Members of the European Parliament also passed a blockchain resolution in the Industry, Research and Energy Committee in order that the EU remains a global hub for fintech — operated on pan-European platforms — post-Brexit, when the EU’s largest financial center, London, leaves the union. As Daniel Mareels of the EESC explained:

“It is clear that, post-Brexit, the EU will have major financial centers, including the U.K. and Switzerland, as neighbors. In this context, it is important for the EU to consolidate, integrate and ensure that it is in a strong position. The establishment of the CMU and the recent initiatives on fintech and the digital economy are part of these ambitious objectives.”

Undoubtedly these are historic times for London, which is losing financial institutions to other EU financial centers on a daily basis. Over the past decade, London was featured center stage in two major events. From 2007 to 2008, it was engulfed in the global financial crisis. Major banks utilized  the U.K.’s network of offshore tax havens in structuring opaque mortgage-backed securities that caused the credit crisis that wreaked havoc on the world economy, threatening the collapse of the world’s largest financial institutions and which was cured by the bailout and nationalization of banks by governments. The U.K. led the massive bailouts with $850 billion that was required to save stricken institutions, which became the target of popular resentment and public scrutiny. And since June 2016, London has been forced to deal with a second major challenge: managing the ongoing difficulties posed by the decision to leave the EU. A decision that has jeopardized its role in opaque, offshore euro-transacted business.

The EU has amended its fifth Anti-Money Laundering (AML) directive for crypto-asset, beneficial-ownership disclosure rules on April 19, but this amendment will be transposed into member state national laws in an individualized fashion within the next 18 months — by January of 2020.

Vera Jourova, a member of the European Comission responsible for Justice, Consumers and Gender Equity, at a Special Committee on Financial Crimes, Tax Evasion and Tax Avoidance (TAX3) meeting, explained that ‘‘there is a lack of implementation of AML by 20 member states, as well as very poor cooperation among member states in enforcing AML.’’ Banks are free to move capital across EU states and beyond, but checks on money laundering and other financial crimes remain largely a national competence — a mismatch that EU authorities say hampers transnational/cross-border controls and creates financial stability risks. Some member states are calling for a new body to be set up to counter money laundering at the EU level, while others favor the idea of giving more power to one of the existing EU financial regulators, such as the European Banking Authority (EBA).

The U.K. launched a new AML watchdog in the beginning of this year and has indicated that, despite Brexit, it intends to adopt EU’s fifth AML directive that is designed to combat terrorism and money laundering, in a move that could unmask the beneficiaries of thousands of secretive trusts for the first time. The directive will apply only to the U.K., rather than its satellites. U.K.-affiliated offshore financial centers will be left to decide whether or not to adopt some or all of the measures.

The European Parliament Committee on Economic and Monetary Affairs (ECON) sees crypto assets as an indispensable element of European fintech but warns against anti-competitive behavior by traditional banks, which is monitored by the EU Antitrust Commission.

The EU Antitrust Commission also monitors aggressive tax planning — including by crypto-businesses — that skews competition within the EU. Ricardo Cardoso, the spokesperson handling Commissioner Margrethe Vestager’s portfolio, said that the EC ‘‘has no ongoing investigations concerning cryptocurrency-related issues and we would never speculate on such matters.’’ Instead, TAX3 was established, which has been a threat from the EU to the U.K.’s network of offshore tax havens.

With a long-term solution of taxing digital firms being postponed until 2020 by the OECD, the EU Commission took the lead by proposing an EU-wide digital tax ahead of the OECD — a brand new taxable nexus, ‘‘digital presence’’ or virtual permanent establishment concepts, which are not addressed in current tax treaties. As Krister Andersson of the EESC said:

“When assessing the effective level of taxation of the digital sector, the EESC underlines the need to take into account the changes in the tax codes going forward, due to the ongoing implementation of BEPS rules and, in particular, to consider the substantially increased level of taxation in the U.S. of U.S. digital firms operating in the EU, due to changes in the U.S. Tax Code.”

U.K. Chancellor of the Exchequer Philip Hammond disagrees and has called for a global approach to digital taxation through further dialogue at the OECD — rather than pursuing the EU solution.

For the most part, member states characterize crypto-assets as something other than ‘‘legal tender.’ But despite this fact member states — except for the Czech Republic, Estonia, and Poland — as well as the U.K., follow a 2015 decision by the Court of Justice of the European Union that exempts cryptocurrency transactions from VAT because ‘‘Bitcoin’’ had no other purpose than to be a means of payment.

On July 16, the U.K. Parliament voted to amend the Brexit Customs Paper to ensure the U.K. does not remain within the EU VAT regime post-Brexit, which means that the U.K. will not attempt to collect EU VAT on behalf of other EU states, enjoy many cross border trade VAT simplifications, nor remain subject to European Court of Justice rulings on indirect tax.

Selva Ozelli, Esq., CPA is an international tax attorney and CPA who frequently writes about tax, legal and accounting issues for Tax Notes, Bloomberg BNA, other publications and the OECD..