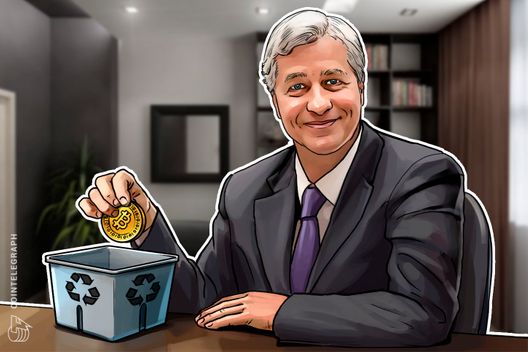 Bitcoin is a “scam,” JPMorgan CEO Jamie Dimon said this weekend, returning to his original stance on the cryptocurrency.

JPMorgan CEO Jamie Dimon returned to his more critical comments about Bitcoin, calling the cryptocurrency a “scam” and saying he had “no interest” in it, Bloomberg reported Sunday, August 5.

Dimon was speaking at the Aspen Institute’s 25th Annual Summer Celebration Gala on Saturday, including cryptocurrency as part of general comments he made about the U.S. economic outlook.

His words were soon repeated in both the mainstream press and online by prominent economic sources, notably Nouriel Roubini, who has also become known this year for his critical stance on Bitcoin.

According to Bloomberg, Dimon further “suggested governments may move to shut down the currencies [cryptocurrency], because of an inability to control them.”

The finance mogul’s history with cryptocurrency has been chequered. Having caused a stir in September 2017 when he originally called Bitcoin a “fraud,” Dimon thereafter appeared to change tact, later saying he “regretted” his choice of words.

“I wouldn’t put this high on the category of important things in the world. But I’m not going to talk about bitcoin anymore,” he told reporters last October.

In January, Dimon kept his promise, telling Cointelegraph in private comments that he “can’t answer” when asked how he felt about moving markets with his earlier Bitcoin “fraud” comments. However, he added that he was “not a skeptic” regarding cryptocurrency.

In his recent interview published in the July-August issue of the Harvard Business Review, Dimon again refused to comment directly on crypto, reiterating “I probably shouldn’t say any more about cryptocurrency.” In the same interview, Dimon also made a point of calling blockchain technology “real,” –– while implying that crypto is not –– saying that the banking giant is “testing it [blockchain] and will use it for a whole lot of things.”

Since then, mixed signals have emerged from other JPMorgan sources, the company’s co-president Daniel Pinto telling CNBC in May that cryptocurrencies “are real but not in the current form.” He added executives were “looking into” the space at a time when fellow finance giant Goldman Sachs revealed it was working on offering Bitcoin futures.