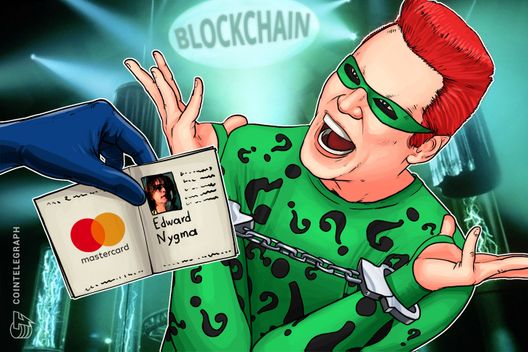 MasterCard has filed a patent for a private Blockchain system to store and verify identity data.

Mastercard has filed a patent for a Blockchain system to store and verify identity data, in an application published by the U.S Patent and Trademark Office (USPTO) April 12.

“Traditionally, proof [of identity] has been provided via government identification, credit cards, business cards…[such] proof may be inaccurate… or may be entirely fabricated in ways that may be difficult to identify… there is a need for a technical solution to provide for the immutable storage of identity and credential data.”

The patent continues to outline the ways in which the distributed storage of identity data on a Blockchain system can function to prevent such abuses. In only permitting authorised nodes to submit and update system data, the patent proposes a (semi-)private, rather than public, Blockchain solution.

MasterCard-approved nodes would require each entity to provide, as a minimum, a public key and a geographic jurisdiction in order to generate a data file. These “subordinate” entities would  each be assigned a digital signature by a “superior” entity. A “hashing module” of MasterCard’s processing server would then generate an “identity value” for each entity and create a timestamped block, with a record of the most recent block added to the Blockchain.

In this way, the patent concludes, the Blockchain can function to “maintain a continuously growing list of data records hardened against tampering and revision.”

MasterCard submitted a Blockchain tech patent for instant payments back in Nov. 2017, with its Blockchain system offering business-to-business payments in place since Oct. 2017. Sunday, April 15, Cointelegraph reported that MasterCard Ireland is recruiting 175 new employees in Dublin, with a specific appeal to Blockchain tech specialists.

Overall, the company appears to be staunch in its pro-Blockchain, anti-Bitcoin stance. MasterCard Labs has reportedly filed for over 30 “patents related to Blockchain tech and cryptocurrency” to date, yet the company’s CEO notoriously disparaged non-government mandated altcoins as “junk.” This stance was once more emphasized this March, with a senior MasterCard executive highlighting the company’s receptivity to central bank issued digital currencies only.