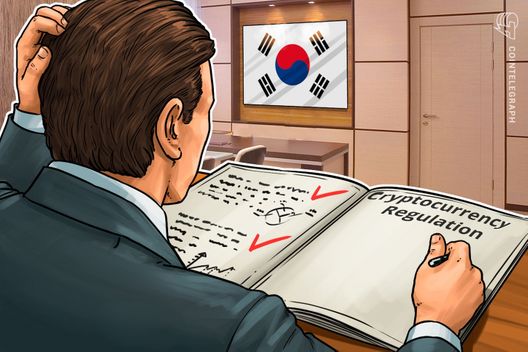 The newly appointed head of one of South Korea’s financial regulators said in a press conference today that there are “a lot of issues” with current crypto regulations.

The newly appointed governor of South Korea’s Financial Supervisory Service (FSS) said that he sees “some positive aspects” to cryptocurrencies in a press conference today, May 6. The governor also said the FSS will be working on crypto regulatory “issues” in collaboration with other regulators, local news outlet The Korea Times reports.

Yoon Suk-heun, who will officially begin work on May 8, said that better crypto regulation “would produce” the kind of secure financial system that makes crypto-related products more accessible.

After South Korea banned anonymous trading on domestic crypto exchanges in December of this year, rumors circulated that an all-out crypto ban in the country was imminent, a claim denied by South Korea’s Finance Minister in January.

Yoon did not answer a question about how the FSS will deal with domestic crypto exchanges, instead replying that “there are a lot of issues that need to be addressed and reviewed. We can figure them out but gradually.”

After the non-anonymous trading ban was introduced – which also banned non-resident foreigners and South Korean citizens under 18 from trading – the “daily transactions of cryptocurrencies plummeted to around 400 billion won from 4 trillion won before the financial regulators implement the new regulation,” VP of South Korean crypto exchange Bithumb Lee Jeong-ah told The Korean Times.

“But you can’t entirely kill the markets by simply imposing regulations. What the new FSS chief should think about is how the regulators should provide remedies to help crypto trading and blockchain technology get better.”

In March of this year, South Korean government officials were banned from both trading and holding cryptocurrencies. More recently, in one of the first more friendly moves towards the crypto sphere, a group of South Korean lawmakers introduced a bill to make the domestic launch of Initial Coin Offerings (ICO) legal, albeit supervised strictly by the Ministry of Science and ICT and the Financial Services Commission (FSC), which directs the FSS.