News outlet Salon is giving its visitors the ‘option’ to either see ads or allow Salon to use their computers’ power, apparently to mine crypto, to support the company

American news outlet Salon is now offering visitors the bizarre option of either disabling their ad blockers or allowing Salon to access a visitor’s “unused computing power”, a veiled way of apparently asking users to allow Salon to mine cryptocurrency via the user’s computer.

Salon frames its request to users around supporting the company, stating in a pop-up on the site “[w]e depend on ads to keep our content free for you”. The site also informs visitors that if users choose to let Salon access their “unused” processing power, said power can be used for a variety of humanitarian and scientific projects, from Blockchain technology to analysis of signals from space to see if extraterrestrials are attempting to make contact.

If one opens Salon.com with an ad blocker running, the following message will pop up: 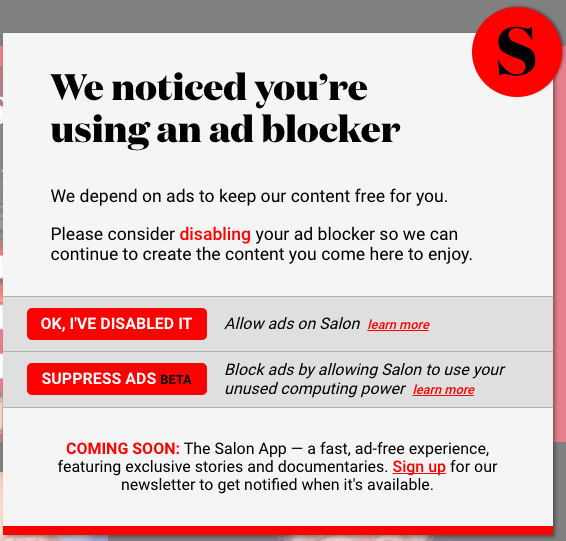 Clicking on the “learn more” about the Suppress Ads beta option, Salon begins answering visitors’ questions, starting with an in-depth explanation how revenue has been falling in the journalism industry.

If a user decides to opt-in to the Suppress Ads beta option, the user’s unused processing power will then be used by Salon to run calculations, a process described by the publication as similar to “borrowing your calculator for a few minutes to figure out the answer to math problems, then giving it back when you leave the site.” This sentence hyperlinks to a Salon article about the technology behind Bitcoin mining, while nowhere else in the FAQs are the words “Bitcoin” or “mining” mentioned.

Salon does mention that their beta program uses your computer to help “support the evolution and growth of blockchain technology and cryptocurrencies”, again not mentioning mining, which is what it appears the company is very much doing. Salon’s FAQ on Suppress Ads beta assures visitors that it is perfectly normal if their computer fan turns on while Salon is using their computer’s processing power.

Journalist Ian Miles Cheong wrote on Twitter today that Salon is using Coinhive, a script made to mine altcoin Monero and marketed to companies as an “alternative” source of revenue to ads.

Salon is installing CoinHive onto your PC without explicitly explaining to you that it’s using your CPU power to mine for bitcoin. https://t.co/B4oEoFVenK

While Salon’s FAQ section also does not mention Coinhive, the Financial Times wrote today that a different Salon pop-up about the same process says at the bottom, “powered by Coinhive”. Coinhive has been used before as an alternative to advertising by both Showtime and The Pirate Bay, albeit surreptitiously, without a warning pop-up as Salon has.

After Showtime was revealed to be covertly running the Coinhive script on visitors’ computers that had an ad blocker installed, Coinhive wrote on their website that they were “saddened” to hear of their script being used without being disclosed, and that permission should be asked before running Coinhive for mining.