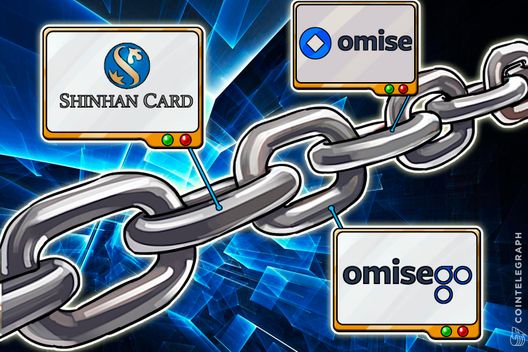 Omise and its ETH scaling solution platform OmiseGO have entered into a collaborative fintech agreement with South Korea’s ShinhanCard.

Thailand’s Omise and OmiseGO (OMG) have signed a Memorandum of Understanding (MoU) with major South Korean credit card business and technical company ShinhanCard, an affiliate of Shinhan Financial Group, as part of a move towards fintech innovation and Blockchain adoption throughout Asia, according to Omise’s press release published Thursday, April 5.

Omise is a payment solution platform that has operational hubs in Thailand, Singapore, Japan, and Indonesia; OmiseGO is its decentralized scaling solution network for Ethereum (ETH). OmiseGO raised $25 mln in an Initial Coin Offering (ICO) last August to support the creation of their platform.

Cointelegraph contributor Joseph Young tweeted April 5 about the MoU, nothing that Shinhan is South Korea’s second largest bank, and calling the move “huge” news for OmiseGo and “the entire Ethereum community:”

Shinhan is the second biggest bank in South Korea that started to provide banking services to cryptocurrency exchanges when the country’s largest bank denied them.

This is huge for OmiseGo and I believe for the entire Ethereum community.https://t.co/gzzKsNPfVk

According to the press release, the MoU will bring Omise further into Southeast Asia and Japan, as well as help to “advance ShinhanCard’s digital offerings across its portfolio of payment services and mobile application” with the use of OmiseGo’s publicly available server and SDK wallets.

Jun Hasegawa, the CEO and founder of Omise and OmiseGO, said in the press release,

“Omise and OmiseGO are working to revolutionize the way digital value moves globally, with an end goal of creating a platform that facilitates a decentralized economy. The OMG platform, using the Plasma architecture, is being built as a public network that is powered by Ethereum. The first phase of the [OmiseGO] wallet SDK was recently release [sic] and is available for anyone to use. We want to make it easy for those who need online asset exchange as part of their business to connect seamlessly to the OMG Network.”

This week has already seen two wins for Blockchain adoption in Asia, with the launch of the “Blockchain Challenge” to promote innovation in businesses by Singapore’s media authority, as well as Japanese chat app Line Plus’s opening of a Blockchain affiliate in South Korea.