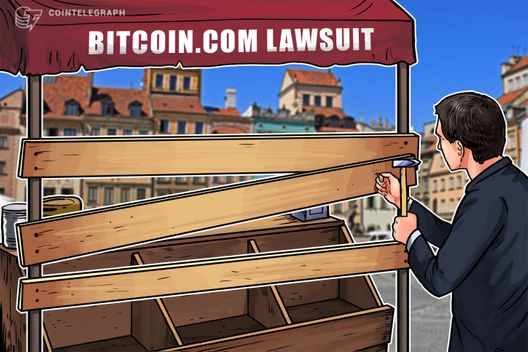 The pro-BTC movement that threatened a lawsuit against Bitcoin.com for its alleged dis-information practices has now cancelled the initiative, citing lack of funds.

The pro-Bitcoin community movement that galvanized last week against Bitcoin.com has reversed its plans to level a lawsuit against the site, community leader MoneyTrigz announced on the group’s Telegram channel yesterday, May 3.

Members of the movement were outraged that major crypto wallet and media service Bitcoin.com — run by prominent Bitcoin Cash-proponent Roger Ver — appeared to be intentionally blurring the distinction between Bitcoin (BTC) and Bitcoin Cash (BCH), and misleading buyers into buying the latter.

On April 27, the group launched a website to gather claimants and donations for a promised lawsuit. However, the apparent initiator of the movement, MoneyTrigz, said yesterday they are cancelling the initiative due to the fact that only $3700 in BTC has been raised so far:

We appreciate the 31 people that donated to the initiative
But $3700 wont be enough to do much, so we decided to cancel the initiative and refund the 31 transactions (total 0.39btc)
im happy were able to atleast get bitcoincom make 90% changes on its fraude and dis-information pic.twitter.com/EixrrqffD5

The group’s Telegram channel has amassed 1125 members to press time, and MoneyTrigz is now refunding the 33 users who donated to the effort:

Many of the group’s supporters point out that under just the threat of legal action from the movement, Bitcoin.com has been forced to make significant changes to the content of its site. Litecoin creator and crypto community influencer Charlie Lee noted one of the changes on Twitter this week:

I retract my statement calling the lawsuit stupid. I just found out that Roger has changed the website back to listing bcash as “Bitcoin Cash (BCH)” instead of just Bitcoin. So for that, the lawsuit has already done some good. So carry on!

The group’s response to the decision to pull the lawsuit has been largely positive, with one user saying it was “the first time Roger [Ver] scaled back on his fraudulent practices.”

The battle for brand dominance between Bitcoin and Bitcoin Cash, a coin whose advocates argue provides better scalability than the world’s top coin, has continued to rage since Bitcoin Cash hard-forked from the Bitcoin blockchain in August 2017.