The 2018 Wealth Report from Knight Frank, a global real estate consultant firm, has found that their clients have been exposed to cryptocurrencies the least out of all the assets surveyed, ranking lower than gold.

A chart from the Knight Frank Attitudes Survey shows the percentage of clients who only experienced an increase in exposure to certain assets, which puts cryptocurrencies below gold at 21 percent. 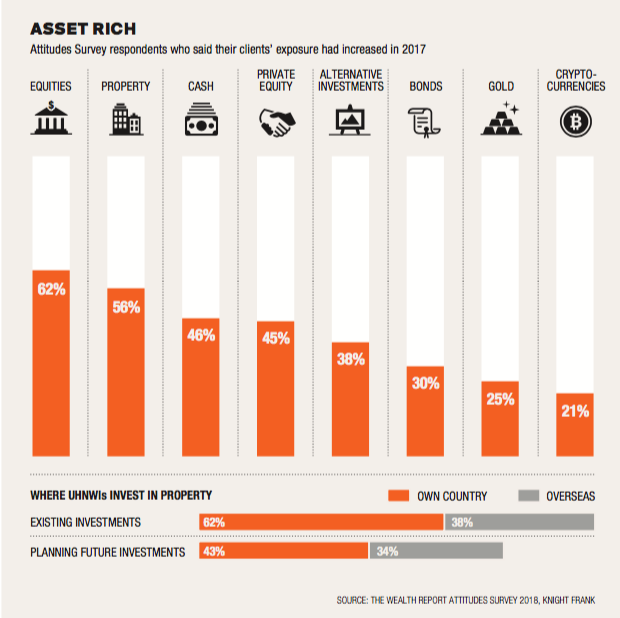 Although Bitcoin (BTC) has sometimes been referred to as “digital gold,” the World Gold Council sees the main differences between the two assets as BTC’s lower “day-to-day liquidity” and gold’s diverse uses and application in the jewelry industry, as well as the tech industry and central banks.

According to the data, the region with the highest exposure to cryptocurrencies is Latin America, at 33 percent, which may be accounted for by rising hyperinflation in Venezuela’s economy. This hyperinflation may be leading to the “Bitcoinization” of Venezuela, as more Venezuelans have turned to crypto as opposed to using the Bolivar, whose total value at one point last fall was only equal to 50 percent of the virtual gold in World of Warcraft.

Venezuelan President Nicolas Maduro has tried to capitalize on the popularity of crypto in his country, launching a state-backed coin, the Petro, in the end of February to uncertain fanfare.

The region with the lowest average increase in exposure to cryptocurrencies is Asia at 5 percent. The lack of exposure could be attributed to the crypto bans currently in effect in China, such as the ban of domestic exchanges, foreign exchanges, as well as Initial Coin Offerings (ICO). South Korea, which is well known for the high public use of cryptocurrencies, also implemented a crypto ban of anonymous trading on cryptocurrency exchanges this year.

The wealth report also asks about Knight Frank clients’ views on Blockchain technology, with the majority answer for the global average of respondents as “doubt many of my clients have heard of Blockchain.” 4 percent as the global average responded, “Blockchain is already having a tangible impact,” with Russia and the Commonwealth of Independent States (CIS) tied with North America at 8 percent.

Knight Frank has 370 offices across 55 countries, managing over $817 bln worth of properties ranging from commercial and residential to agricultural.