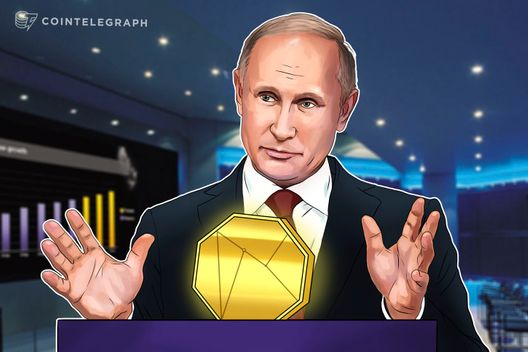 Russian President Vladimir Putin issued ambiguous, but mostly negative, commentary on the question of Russian issuing its own cryptocurrency during his annual live question and answer session with the Russian public today, June 7.

On today’s live session with the president, known as the “Direct Line”, Russian blogger Artem Khokholikov asked the president three questions about cryptocurrency:

“Will Russia have its own cryptocurrency? […] Will it be controlled by the government? […] Do you think that in the near future cryptocurrency will completely replace our regular, standard money?”

Putin answered by first explaining that Russia cannot have its own cryptocurrency, as cryptocurrency “by definition” cannot be owned by a centralized state, since it “goes beyond borders.” Putin then brought up “so-called mining,” noting that Russia does not regulate the practice but “treat[s] it very carefully.”

In regards to cryptocurrency as form of payment, like money, Putin noted that although experts say Japan has partially adopted crypto as payment, “it doesn’t work in other countries,” specifying:

“The relationship of the Central Bank of the Russian Federation to cryptocurrency [is that] it considers cryptocurrency neither a means of payment nor a store of value. Cryptocurrency is not backed by anything. One should treat it cautiously, carefully.”

Putin added that Russia must keep an eye on this “phenomenon developing in the world” in order to determine how Russia can “participate in the process”.

He added that Russia must also look into “how we can use it [cryptocurrency] in order to avoid any restrictions in the field of international financial activity,” perhaps a veiled reference to the potential use of cryptocurrency to avoid Western sanctions currently imposed on the country.

This is Putin’s 16th “Direct Line”, an annual event on live TV that allows the Russian public to ask the president questions, generally known to be curated beforehand to address particular issues in Russia’s domestic and foreign policies. The fact that cryptocurrency was brought up in today’s event arguably signals that it will be a topic more actively addressed in policy in the near future.

In regards to a government-issued cryptocurrency, state and private entities in Russia have reportedly been discussing the idea of releasing a “CryptoRuble” or “BitRuble” since 2015. In January of this year, a tentative launch for the state-issued cryptocurrency was set for mid-2019. In early January, an economic advisor to Putin said that the CryptoRuble could help to alleviate the pressures of financial sanctions.

At the end of May, the Russian State Duma almost unanimously approved the first of three readings of Russia’s major crypto and blockchain-related bill, “On Digital Financial Assets”. The final version of the bill, which will effectively regulate the entire industry in the country, is set to be passed by July 1.