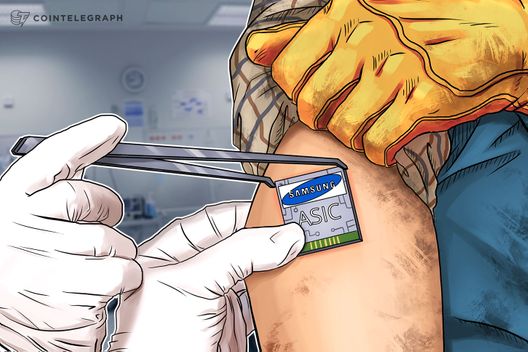 Crypto mining distributor MyRig recently revealed that electronics giant Samsung supplies the ASIC chips for Bitcoin (BTC) miners made by Halong Mining, according to a tweet from MyRig April 10.

On Tuesday, MyRig tweeted an image of a company representative holding a plate of semiconductor material used in the production of integrated circuits. The firm said that the piece of equipment is “what powers Halong Mining DragonMint T1” and is produced by Samsung.

Now Dragon Flying (Shipping), this is what powers @halongmining DragonMint T1. Yes Samsung and Yes 10nm. i’m sure someone had seen some news in the past about it from big foundry about bitcoin and cryptos. pic.twitter.com/CyPhK4XMxy

Samsung first revealed that it started manufacturing Application-Specific Integrated Circuit (ASIC) chips for “mass production” in China in January 2018. An ASIC chip is a piece of mining hardware designed to mine cryptocurrencies based on a specific hashing algorithm.

Twitter user CobraBitcoin condemned Halong’s miners, claiming that one day the company’s activity will turn out to be “one of the biggest scandals and scams in Bitcoin,” the scale of which will even create a new verb “halong” in the crypto community.

I’m calling it, but once this whole situation with Halong Mining is revealed, it’s going to be one of the biggest scandals and scams in Bitcoin. Getting “Halonged” will become a new verb in the community, right beside Goxed.

CobraBitcoin also criticized how the equipment was released and shipped, claiming that the company sells “non-existent miners”.

Halong Mining is a scam. They sold re-badged Innosilicon BTC miners obtained through dubious means, and sold fake non-existent miners for other algorithms (customers *still* waiting for these to ship). They are huge scammers.

Some disgruntled customers took to Reddit, complaining about large order bundle requirements of at least 5 miners at a time, in addition to inadequate customer support and long shipping times.

However, some customers are pleased with the product. One Twitter user recently expressed their satisfaction with Halong’s DragonMint B29.

Received my Halong B29 miner today. Generally impressed with their design and hashrate of 2.55ths at 900w. 0.45ths more than advertised. At $170/day without much competition till June, was a good call taking the risk with @HalongMining Great company!

Earlier this month, Bitmain released Ethash ASIC miners, claiming it is the “world’s most powerful and efficient EtHash ASIC miner.” Some in the Ethereum (ETH) community have suggested a hard fork in the ETH protocol to invalidate ASICs.