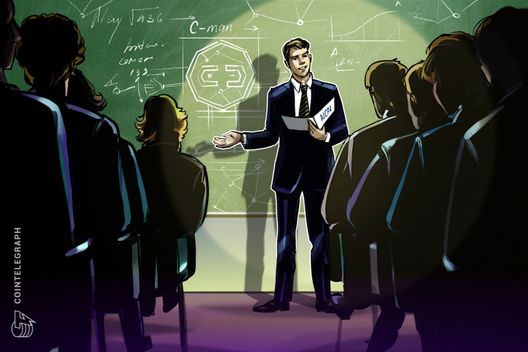 What does AICPA says in its second letter to the IRS.

If you would like to contribute an Expert Take, please email your ideas and CV to george@cointelegraph.com.

The views and opinions expressed here are solely those of the author and do not necessarily reflect the views of Cointelegraph.com. This article does not contain investment advice or recommendations. Every investment and trading move involves risk, you should conduct your own research when making a decision.

In the US, cryptocurrencies at a federal level are regulated by the Financial Crimes Enforcement Network (FinCen), the Office of Foreign Assets Control (OFAC), the Internal Revenue Service (IRS), the Commodity Futures Trading Commission (CFTC) and the Securities Exchange Commission (SEC) which characterize cryptocurrencies as money, property, commodity and a security respectively.

On May 30th, the American Institute of Certified Public Accountants (AICPA) for a second time, sent a letter to the IRS asking for more direction on cryptocurrency taxation beyond Notice 2014-21 which treats them as property.  The AICPA’s first letter to the IRS was sent two years ago, on June 10, 2016.

“We recommend the IRS release immediate guidance regarding the tax treatment of virtual currency transactions, similar to that of Notice 2014-21 so that authoritative guidance exists,” said Annette Nellen, CPA, CGMA, Esq., chair of the AICPA Tax Executive Committee.

“Specifically, we request additional guidance that will address items from the original Notice 2014-21, and new issues that are relevant to the 2017 tax year, such as chain splits, forks that have arisen subsequent to the release of the original notice” an issue which the American Bar Association’s Tax Section also addressed in a letter to the IRS during the first quarter of this year.

Cryptocurrency events: Cruptocurrency events including chain splits, forks, airdrops and giveaways are subject to price discovery and therefore, create a unique challenge in determining a USD translation for virtual currencies that newly come into existence for US tax purposes.

For example, Ethereum Classic on May 29th “forked” in an attempt to solve a mining issue.  The change necessitated all users of the original blockchain to update their software but disable a feature designed to make mining more difficult.  This feature was originally coded in as a way to switch from a Proof of Work, to a Proof of Stake concept. The developers of Ethereum have decided to stick to Proof of Work for now.

Notice 2014-21 does not address the tax treatment of forks, chain splits, airdrops, giveaways, or other similar activities that are unique to blockchain technology and cryptocurrencies.

Expenses of obtaining cryptocurrencies: Users of cryptocurrencies can obtain it by exchanging it or borrowing it for fiat currencies; or other cryptocurrencies including ICO tokens; or by “mining,” which is the process of having computers compete to solve complex mathematical problems.

Section 4, Q&A-8 of Notice 2014-21 states that when a taxpayer successfully mines virtual currency, the fair market value of the virtual currency as of the date of receipt is includible in gross income.  This implies that mining is akin to a service activity. Therefore, it is appropriate to treat the costs of mining virtual currency similar to expenses incurred in providing other services which are expensed as paid or incurred.

As Cointelegraph writes, in a new case of permissioned use of cryptomining, news site Salon.com gave its users the option to allow Salon.com to access their “unused computing power” as an alternative to seeing advertisements.   This alternative form of monetization to traditional advertising by Salon means that any Moneros that Salon mined off of its visitors would be taxed appropriately.

AICPA’s letter to the IRS, suggests that cryptocurrency mining should be treated as ordinary income in the year it is mined, and the expenses of mining deducted as incurred.  Because the matching of income and expenses are consistent with other service activities. Crytpocurrency mining equipment should be capitalized and depreciated like any other property whose useful life extends beyond one year.

AICPA’s letter to the IRS however does not address, how expenses incurred by taxpayers in crypto asset lending transactions or in attaining ICO tokens should be handled.

For example, how would holders of BAR tokens issued by Titanium Blockchain Infrastructure Services, whose founder squandered portions of the firm’s $21 million ICO sale proceeds, to pay for his Hawaiian condominium treat it for tax purposes?

Acceptable valuation documentation & computation of gains and losses of cryptocurrencies: A cryptocurrency has an equivalent value in fiat currency or acts as a substitute for real currency based on its determinable value in the market.

AICPA’s letter to the IRS suggests that further guidance and examples are necessary to define “reasonable manner” since there could be considerable differences in cryptocurrency pricing on different exchanges.  That taxpayers should be allowed to use an average of different exchanges as long as they are consistent in how they calculate the valuation and in how they make this determination for every cryptocurrency transaction.  And choose either specific identification or FIFO as long as the method is consistently applied from year to year to calculate their cryptocurrency gains and losses.

This would be particularly important since so many companies began developing cryptocurrency and blockchain-oriented accounting and tax software that US taxpayers rely on as a reasonable and consistent method for determining fair value of their cryptocurrency gains and losses for US tax purposes.

Notice 2014-21 does not address tax foreign reporting requirements for cryptocurrencies.

AICPA’s letter to the IRS, suggests that taxpayers should report the value of cryptocurrencies and fiat currencies held at those foreign exchanges for FBAR and FATCA purposes if they meet the necessary threshold, but not when a taxpayer holds cryptocurrency in a wallet which the taxpayer owns, controls and is in possession of a private key.

Selva Ozelli, Esq., CPA is an international tax attorney and CPA who frequently writes about tax, legal and accounting issues for Tax Notes, Bloomberg BNA, other publications and the OECD.