Venezuela has reportedly offered the Indian government a fantastic deal: a 30 percent discount on crude oil imports. The only condition being that the oil must be purchased through the nation’s newly minted cryptocurrency, the Petro.

The release of the currency comes as Maduro’s government attempts to address a number of pressing financial issues that have pushed Venezuela into a crippling recession. As a nation heavily dependent on oil exports, the dramatic fall in crude oil price hit the South American country especially hard. The recent fall has been dramatic with increased production and reduced consumption plummeting the world price from above $125 per barrel in 2012 to less than $30 by January of 2016. The IMF predicts that, by the end of year, Venezuela will have experienced a GDP decline of nearly 50 percent since 2013.

In response to the political controversy surrounding the election of President Maduro and substantial evidence of human rights abuse, the Trump administration in August 2017 announced additional sanctions against Venezuela and encouraged its allies to follow a similar course. This further hampering of the economy, which is expected to contract 15 percent by the end of the year, turned the situation dire. In November, the government announced that it could no longer service its foreign debt of $105 billion, “roughly ten times Venezuelan foreign exchange reserves,” and that a restructuring was imminent. 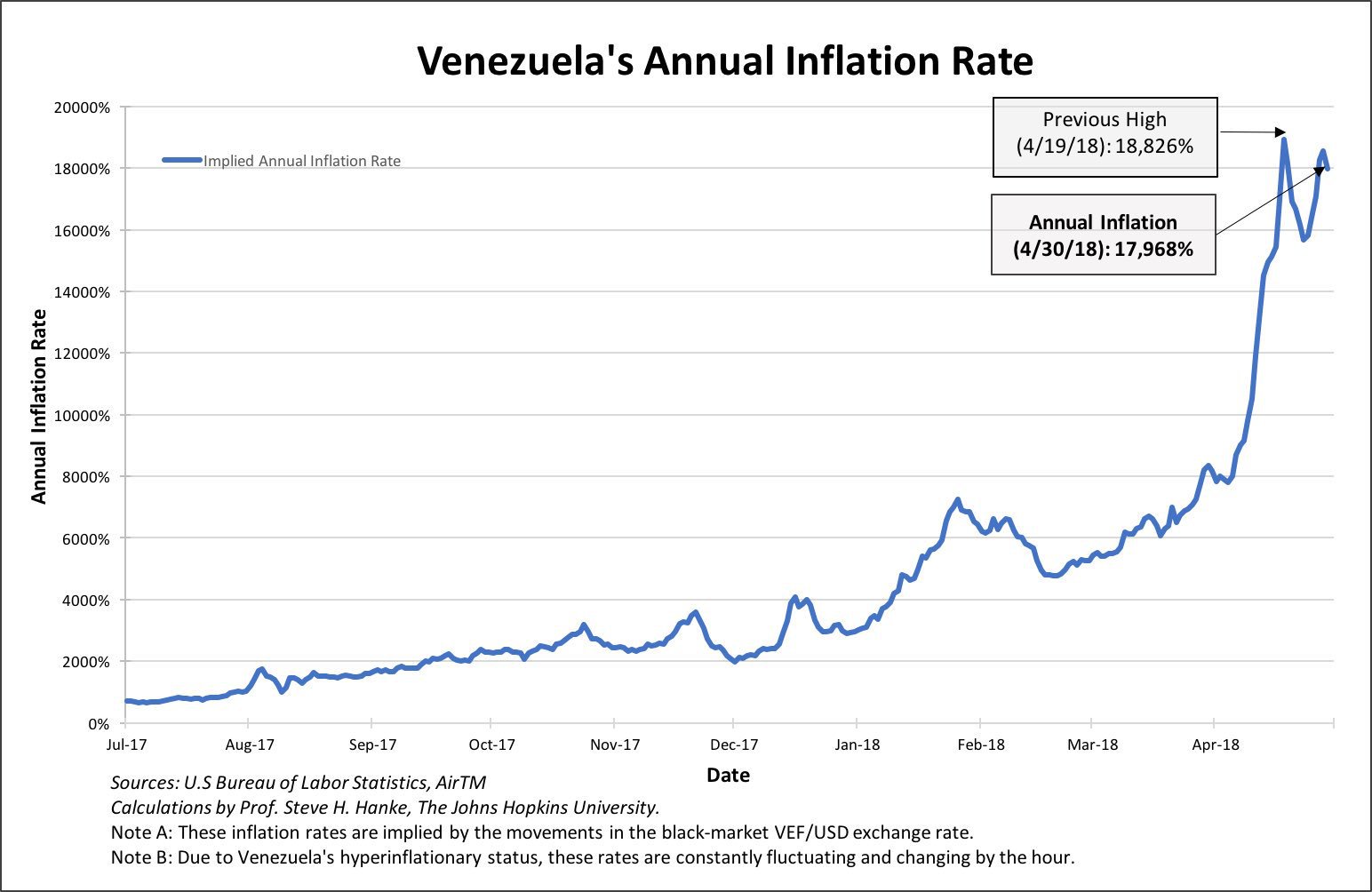 To add to the list of troubles, the country’s rampant inflation has caused a desperate shortage of paper currency. The USD gained 3,400 percent against the Bolívar in 2017 and is projected to gain another 13,000 percent by the end of this year. Banks have been forced to limit cash withdrawals to the equivalent of just a few cents a day, while small businesses have been forced to stop accepting the Bolívar as payment in favor of foreign currencies.

By the end of 2017, Venezuela found itself in an unfortunate financial position; economic ostracism as a result of U.S. sanctions had closed off access to almost all traditional means of fiscal rescue. Given the nation’s short list of friends and the nature of its economic crisis, it resorted (unsurprisingly) to leveraging its most lucrative and abundant commodity in tandem with the prevailing enthusiasm that continues to surround cryptocurrency.

Petro will be an instrument for Venezuela’s economic stability and financial independence, coupled with an ambitious and global vision for the creation of a freer, more balanced and fairer international financial system. – Petro white paper

In December of 2017, Venezuela President Nicolás Maduro announced that his government was planning the release of the world’s first digital currency issued by a sovereign nation. The initial presale on February 20, 2018, saw the release of 82.4 million Petros out of what is believed to be a total purse of 100 million PTR. In theory, the currency is backed by the nation’s oil reserves, the largest in the world totaling nearly 300 billion barrels, with a single coin representing a single barrel on a non-transferable basis.

Venezuela has guaranteed its buyers that the Petro will carry the full weight of legal tender, acceptable as payment for fees and taxes and exchangeable for the nation’s hard currency, the Bolívar. Reports have also stated that Venezuela is looking into the possibility of integrating the currency into its compulsory state ID system, the Cédula de Identidad, which is currently used for claiming government benefits and controlling food distribution.

The lead up to and aftermath of the Petro’s release has been rather chaotic, with poor communication and conflicting reports creating mass confusion regarding the details of the new asset.

The Petro’s initial white paper, which seemed to be edited on an almost rolling basis even after the ICO, had the currency pinned as an ERC20 token that would utilize the Ethereum payment rail. The buyer’s manual, however, stated that the coin would be a PTR token that would operate on the NEM blockchain. The discrepancy between the two documents was not clarified until the February 20 pre-sale date when both Maduro and the NEM Foundation confirmed via Twitter that the Petro did indeed operate as a NEM application.

In March, Time Magazine confirmed the rumor that Russia had secretly worked with Venezuela to design the Petro as a means of circumventing U.S. sanctions. It was suspected that this was the intended purpose, but confirmation that the coin was indeed a Russian collusion greatly injured its international reputation as well as its legitimacy as a financial investment.

How the price of the Petro was to be determined also gained criticism. The government set the Petro initial offer against the mid-January price of a barrel of Venezuelan crude oil, around $60 USD, with the price, thereafter, being determined by the barrel price from the day before. The following equation is provided by the white paper:

The most glaring issue with this rationale is that, since oil production is a nationalized industry, the price of a barrel of Venezuelan oil is determined by the Venezuelan government. Though this would in practice follow the world market price, no framework exists to ensure that the Venezuelan government will abide by these guidelines. How current prices are calculated as well as those of the 17.7 million coins that have yet to be released has drawn concern.

The response from the crypto space has been less than raving. Despite the underlying technology, most have found it difficult to classify the Petro as anything other than a digital oil security that bears a much closer resemblance to a fiat currency than it does to Bitcoin. In practice, how the PTR differs from the bonds issued by PDVSA, the state-owned oil company, is difficult to understand.

The sloppiness with which the Petro was brought to market was best displayed when President Maduro announced that the Petro had raised $735 million in its first day of sale without providing a single means of verification. Many in the press balked at this statistic, dismissing it as “farcical” and a direct attempt to mislead investors. In his article “Venezuela’s cryptocurrency is one of the worst investments ever,” Matt O’Brien from the Washington Post voiced the apprehension and skepticism held by many toward the future prospect of this new coin.

What Does the Sale Mean?

In 2017, 8 percent of India’s total petroleum imports came from Venezuela at a cumulative cost of $5.5 billion. Though the regulatory status has yet to be clarified, the past several months have shown that the Indian government is far from comfortable with digital currencies, remaining deeply suspicious of its illicit utility. But this is oil: It’s safe to say that, in the past, countries have done much worse than overlook their objections to cryptocurrencies for the chance to get their hands on a few million barrels of discounted oil.

Though the India deal may be the only one to come to public knowledge, it surely is not the only offer of its kind. Venezuela has other oil guzzling partners, particularly China, who might be convinced to overlook the program’s shortcomings by the lure of cheap petroleum. With the amount of skepticism surrounding the Petro, it seems natural that Venezuela would try to bolster confidence and entice involvement using whatever means necessary.