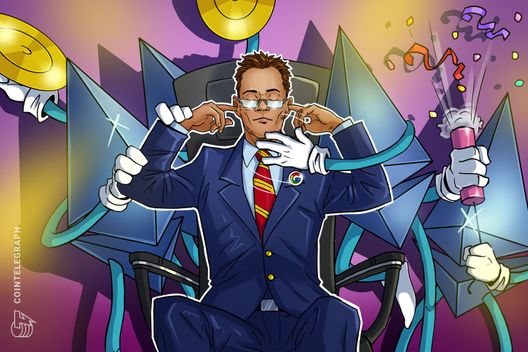 Google Ads: We can’t confirm that Ethereum is eligible to trigger ads, see our policy

Specifically, the startup tweeted that they saw “a hard stop” on Google Ads containing the keyword “Ethereum” starting from Jan. 9. Decenter also tagged the advertising platform’s official account in the tweet, asking whether they had introduced any new policy changes.

The Google Ads account then replied, stating that cryptocurrency exchanges targeting the United States and Japan can be advertised on the platform, while targeting other countries could be the reason for the ad rejection. While Decenter is based in Belgrade, Serbia, it does not provide services as a crypto exchange.

“We’d recommend that you refer to the ‘Cryptocurrencies’ section of our policy on Financial products and services.”

In the referred section of their policy, Google Ads states that “due to the complex and evolving nature of regulations related to cryptocurrencies and related products and services,” the company only allows advertising mining-related services and cryptocurrencies exchanges. The latter is approved for promotion only in Japan and the U.S., however.

The Google Ads guide then explicitly mentions that ads for initial coin offerings (ICOs) and similar services, along with “ad destinations that aggregate or compare issuers of cryptocurrencies or related products” — such as crypto trading signals — are prohibited.

Blanket ban followed by relaxation: Brief introduction to the relationship between Google and crypto

In 2018, after a lengthy period without regulation, Google’s politics regarding cryptocurrencies became significantly stricter. Specifically, on March 14, the search engine giant updated its financial services policy, announcing that it was going to ban all cryptocurrency-related advertising of all types come June.

“We don’t have a crystal ball to know where the future is going to go with cryptocurrencies, but we’ve seen enough consumer harm or potential for consumer harm that it’s an area that we want to approach with extreme caution.”

The move was later described as “unfair” and “troubling” by industry insiders. Interestingly, the news of a crypto ad ban came just days after crypto advertisers using Google Adwords reportedly noticed a drastic drop in the number of views of their advertisements. However, as per Finance Magnates, Google Ads had, at that time, denied any change in their financial services regulations that would block cryptocurrency- or ICO-related advertisements.

Further, on Sep. 25, the U.S. tech giant partly backpedalled on its blanket ban of ads. Google announced it was set to update its ad policy in October, reallowing some crypto businesses to advertise on its platform.

According to the official statement, starting in October, Google would allow registered crypto exchanges to advertise on its Google Adwords platform, targeting the U.S. and Japanese audiences:

“Advertisers will need to be certified with Google for the specific country in which their ads will serve. Advertisers will be able to apply for certification once the policy launches in October.”

The cryptocurrency section of the Google Ads’ policy has since been updated, but the precise amount and nature of crypto businesses that have since been allowed to advertise there remains unknown.

Decenter: “Ethereum” keywords isn’t working for other companies too, Google Ads is to provide a definite explanation within 48 hours

“Google has various political and economic agendas, and they are quite willing to use their various services to promote their preferences. AdSense and YouTube are notorious for this, but there have been some incidents regarding the Play Store as well.”

Other users mostly cited the previous blanket ban and the abundance of scam projects as potential reasons for Google Ads to prohibit such advertisements. Some users reported having problems with other crypto-related keywords besides “Ethereum.” “I have been unable to use the ‘bitcoin’ (or even ‘blockchain’) on my google ads as well,” one of the comments read.

When reached by Cointelegraph, Decenter CEO Andrej Cvoro said that there are other startups which started having difficulties with the “Ethereum” ad keyword this month:

“We are aware of at least five different competitors that used to have Google Ads shown for search phrases such as ‘Ethereum smart contract audit,’ all of which stopped showing at the same time.”

When asked to clarify the names of the companies allegedly dealing with the same problem, Cvoro replied that he was not able to answer that “with certainty”:

“All we know is that there are other companies that used to have their ads displayed for search phrases such as ‘Ethereum smart contract audits,’ which is no longer the case. Due to the intricacies of Google Ads keyword setting mechanism, this does not necessarily mean that these companies had explicitly entered ‘Ethereum’ as one of their keywords, although there is a good chance that this is the case.”

Thus, according to Cvoro, the ads are still showing for other crypto-related tags, but “Ethereum” does not seem to be working — neither for those companies, nor for Decenter itself. That, the startup’s CEO adds, suggests that Ethereum has indeed been blacklisted:

“For example, ‘X smart contract audit’ phrase will show several different ads for any X, except when X = ‘Ethereum.’ Furthermore, we are currently not able to find a single search phrase involving the term ‘Ethereum’ that shows any ads on Google, which strongly implies that ‘Ethereum’ as a keyword has been blacklisted (intentionally or otherwise).”

However, Cvoro does not link the blacklisting to the previous Google restrictions regarding crypto-related ads, as his company allegedly did not face such problems with the keyword “Ethereum” even during the time the ban was fully active:

“We don’t think this is directly related to Google’s blanket ban on cryptocurrencies from the last year. That is something that we have been aware from the very beginning of our Google Ads campaign, but none of our ads were directly (and oftentimes not even indirectly) related to cryptocurrencies, so they were going through the manual reviews even when they were initially put on hold by the algorithm. So what is happening now is different in a sense that keywords containing ‘Ethereum’ aren’t passing manual review anymore, which doesn’t seem to be the case for other blockchain-related terms or phrases.”

On Jan. 15, Decenter received an email from the Google Ads team, the company told Cointelegraph. The answer was originally written in Croatian, but the startup has shared their English translation of the brief statement:

“Thank you for sending an inquiry about the status of your Google Ads with key phrases that contain the term ‘Ethereum’ as one of the keywords.

“Due to how sensitive it is to advertise products and/or services related in any way to cryptocurrencies, I have directly contacted the responsible department with a request for a detailed explanation of why your ads are not showing for the mentioned keywords.
Please be patient and I will get back to you with a final solution within 48 hours.”

Cointelegraph will continue to report on the developments of this story further when more information becomes available. Cointelegraph has also reached out to Google for further comment, but the company has not replied as of press time.